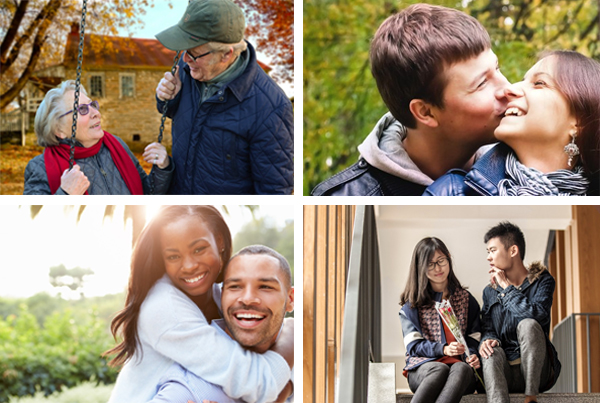 Photo created by Endeavors
Professor Sara Algoe studies couple interactions and, most recently, has looked at the effect of shared laughter and gratitude on relationship satisfaction.
By Alyssa LaFaro
Society

“You need to let the little things that would ordinarily bore you suddenly thrill you.” — Andy Warhol, American artist

Saying “thank you” is one of those “things,” according to Algoe, which is why she’s spent the past eight years studying gratitude (and why she keeps a stack of colorful “thank you” notes on her desk). Plus, she understands the importance of relationships on our health — “our relationships have the same impact on longevity that smoking 15 cigarettes a day has on mortality,” she says.

Algoe developed a theory from her research called “Find, Remind, and Bind,” which suggests that one partner’s expression of gratitude reminds the other partner that he or she is a good relationship companion. With more than 500 expressions of gratitude between romantic couples recorded on video, Algoe thinks one promising avenue for future application of her findings are clinical psychology environments like couples’ counseling. “I feel this moral obligation to go out and collect data because relationships are so important,” she says. “Romantic relationships are one of the most common reasons people go to therapy in the first place.”

In her most recent study, Algoe observed 47 couples, between the ages of 24 and 40, who have been together for an average of five years. She assigned each pair with one of two tasks — to discuss the mundane details of the previous day (control group) or to express gratitude toward one another — and filmed the conversations.

Over the course of the next 30 days, Algoe asked each couple to have a similar conversation four to six times. Participants rated the conversation in regard to how responsive they felt their partner was. They also filled out nightly questionnaires that had them complete sentences like “Today our relationship was …” using a one-through-nine scale, one being “terrible” and nine meaning “terrific.”

At the end of the study, the couples returned to the lab for one final observation. In analyzing the questionnaires and face-to-face interviews, Algoe found that people in the expressed gratitude group felt their relationships became stronger, more adaptable to change, and more positive throughout the 30 days than those in the control group. She hopes to use these findings to further explore gratitude in a relationship context.

“Whenever you have an interaction with your romantic partner, that feeling you have when you walk away sets the stage for the next interaction with that person,” Algoe explains. “If it were the case that my expressions of gratitude actually have an impact on your feelings about the relationship, then that would be some really good evidence that gratitude can help connect people and build these upward spirals of mutual love and support.” In other words, saying “thank you” — whether it be for taking out the trash or for that pair of diamond earrings — makes for a stronger relationship.

Algoe admits that her gratitude research must continue because it certainly has the potential to backfire in certain situations. “I want to make sure to truly test it carefully before couples put it into practice,” she says. “It’s not just about the act of conveying gratitude, but how to convey it. As a field, we have to figure out how to help people express it well.” Although Algoe is still working out the kinks when it comes to the best way to express gratitude, she stresses an important first step: “Both people in the relationship need to be on the same page. It takes two.”

These findings on gratitude continue to drive Algoe’s curiosity, which is why she’s expanded her research to observe other “little things” that play a role in romantic relationships — like laughter. The only research she could find on the topic involved placing participants in front of a TV monitor and showing them a funny video clip. “But laughter, like gratitude, occurs in the context of other people,” she says. “Putting someone in a lab room alone, watching a video doesn’t really capture the interpersonal aspect of what triggers laughter most frequently.”

The literature she’d read assumed that laughter is good for relationships, “but there was no data to actually support that claim,” Algoe says. That’s why she decided to conduct her own study: “Putting laughter in context: Shared laughter as behavioral indicator of relationship well-being.” Algoe and graduate student Laura Kurtz filmed 77 couples and asked them to describe how they first met. While reviewing the videos, they recorded the amount of time each couple spent laughing together and individually.

“People who spent more time laughing with their partner felt that they were more similar to their partner,” Algoe says. “They had this overlapping sense of self with the other person. We also found that the more people laughed with their romantic partner, the more they felt they were supported by that person.”

Although most of Algoe’s research focuses on happy couples, she’d like to further test her findings with couples in conflict. She also wants to expand beyond romantic relationships. Just last year, she received a $1.1 million grant from the John Templeton Foundation to study gratitude’s impact on societal good, which means she can observe relationships among family members, friends, and coworkers. She’s currently collaborating with the University of California, San Diego to test the role of gratitude in organizational settings to understand how everyday emotional interactions between co-workers may have reverberating impacts for the group.

“I want to know how people’s everyday emotions drive their relationships,” Algoe says. “Then, I want to use that information to help improve them. That’s where the magic is. The little things shouldn’t be overlooked.”

Sara Algoe is an assistant professor of social psychology in the Department of Psychology and Neuroscience at UNC-Chapel Hill.

Laura Kurtz is a graduate student in the Social Psychology Graduate Program. Her research focuses on the dynamics of romantic relationships.