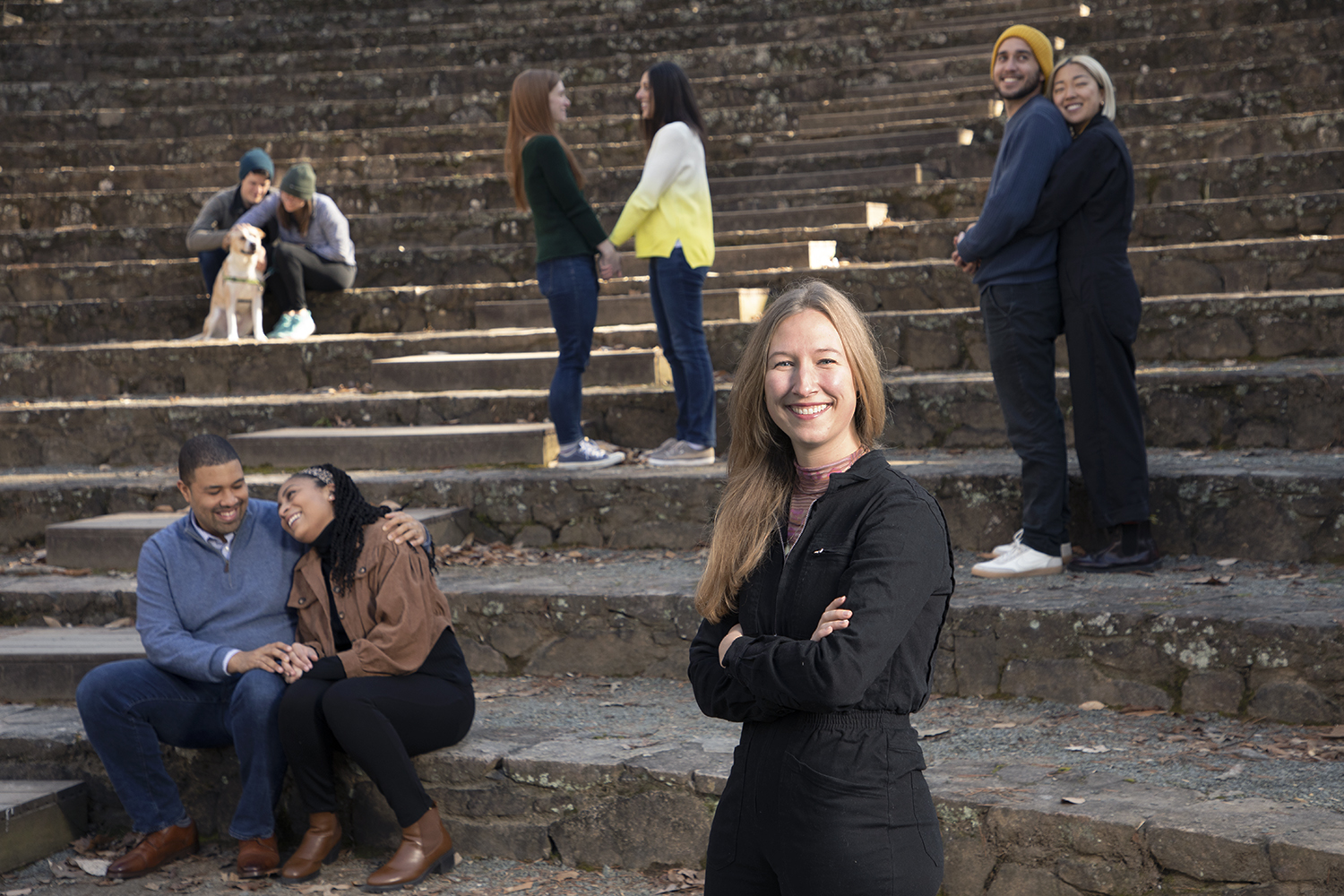 A few years ago, I reached out to one of my girlfriends and asked her to connect me with some “cool people.” I was desperate for new friends and experiences — and absolutely no romantic involvement. She gave me the number of a man she’d known for a long time and, to this day, I’m still not sure if she knew we’d hit it off or if she blindly picked his name out of her hat of pals.

That same week, I reached out to ask him if he wanted to go kayaking at Jordan Lake over the weekend. Turns out, this suggestion was an excellent one. Upon meeting, I quickly learned we both had a deep love for the outdoors, travel, books, music, and trying new foods. 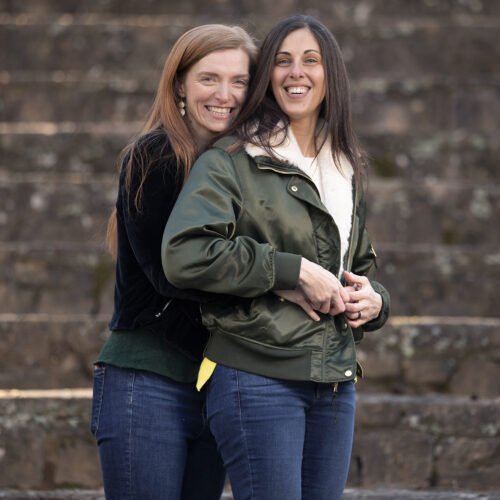 Corina and Krystina have been together since 2021 and are getting married this spring. (photo by Alyssa LaFaro)

We spent most of the afternoon on the lake and proceeded to have dinner together. This led to a nerdy discussion about “Lord of the Rings,” so of course we decided to go back to my place to watch it. In total, we hung out for 12 blissful, and platonic, hours. When he left, I promptly sat on the floor of my kitchen and buried my face in my hands. I liked him. A lot. And it caught me completely off-guard.

That was two-and-a-half years ago. Now, we live together. It’s still blissful, but more than platonic.

What was it about that initial interaction that ultimately led to a relationship? That’s what Tatum Jolink wants to know, too. As a PhD student in the psychology and neuroscience department at UNC-Chapel Hill, she studies relationship initiation.

Whether platonic or romantic, relationships all start somewhere — and similarly. Words and phrases like “we just clicked,” “magnetism,” and “same wavelength” have been used to describe these first-time interactions.

Despite this universal experience, few studies have observed when an initial interaction turns into an actual relationship and what keeps people coming back for more. We know even less about the behaviors that make — or break — introductions.

“There’s a lot that can go into initial interactions,” Jolink says. “They can be confusing. Adrenaline is pumping. Maybe libations are involved. The idea is that there might be some signals, whether conscious or subconscious, that come across in those initial interactions that then make you want to see that person again, follow up, go back for more. Then you see them again and see them again and build a relationship from there.”

The research on established relationships has helped Jolink find the behaviors to look for in these initial interactions between people: shared laughter, expressions of gratitude, and affectionate touch.

Jolink has personally studied what gives rise to affectionate touch — touch that is “implicitly meant to communicate love, care, and affection to the person receiving it” — in established relationships. Examples of affectionate touch include holding hands, hugging, kissing, and lying close together. Jolink wants to know: Why might someone be prompted to touch on a given day? 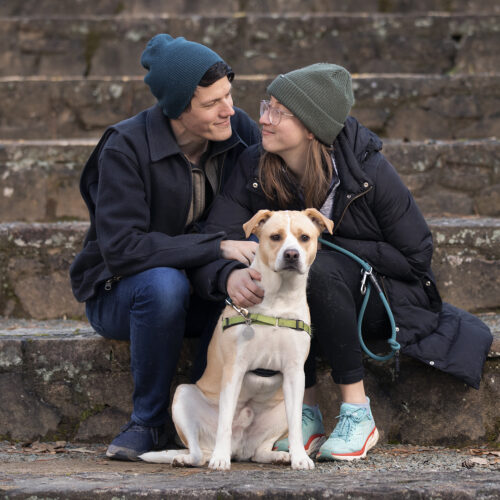 Will and Mallory have been together since 2015 and recently got engaged. Mylo joined their family in 2020. (photo by Alyssa LaFaro)

“Touch has been conceptualized as this moment of intimacy that suggests someone cares for you, that they want to be near you,” she says. “I think just the signal that someone is willing and desires to touch you is powerful.”

In a 2019 study, Jolink observed more than 100 romantic couples interacting in the lab to assess affectionate touch and the responsiveness of partners who expressed gratitude. One member of each couple was randomly assigned to convey appreciation to the other. Jolink and her team of undergraduate researchers wanted to know how the receiver perceived and responded to that appreciation.

Once the expression of gratitude took place, the receiver was given a menial task in another room. Upon completion, they were instructed to return to their partner and wait for the researchers to come back and complete their assessment. During this hang-out window, Jolink observed a myriad of touch behavior — tickling, cuddling, foot rubs.

“The variation in touch that happened in the lab was off the wall,” she says, a smile spreading across her face. “People knew they were being recorded, but that’s something quickly forgotten. I feel like they were acting like they would at home.

“It was also a good reminder that couples are so different from one another,” Jolink adds. “They form habits together and tendencies and are affectionate in different ways — and that was fun to see.”

Jolink also collected diary entries from participants after the lab experience. Upon analyzing the data, a pattern appeared: on a day when one partner expresses care in a meaningful way to the other, affectionate touch is sure to follow. Kissing, in particular, was more likely to occur. The immediate positive effects of these interactions remain active for about one day but suggest that both perceptions of responsiveness and affectionate touch have long-term implications for romantic couples.

While Jolink enjoys studying these interactions among couples, she really wants to know how interpersonal bonds form in the first place — not just romantically but platonically, too. And what better group to study than college first-years? 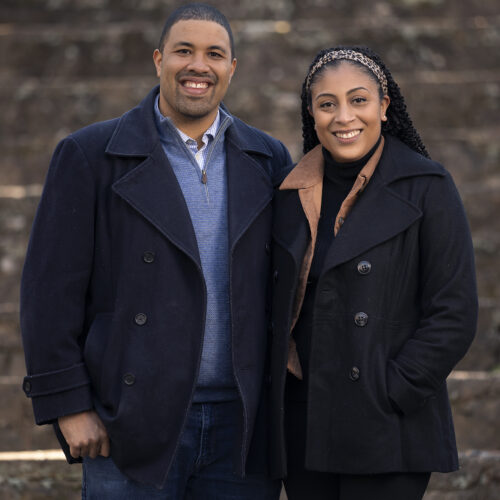 Ricky and Gaby have been together since 2019 and recently got engaged. (photo by Alyssa LaFaro)

“The transition to college, we think, is ripe with initiation,” Jolink says. “You’re meeting new people, forming friendships, and potentially meeting romantic interests — and we wanted to capitalize on that relationship-forming phase by recruiting incoming first-year students and following them as they form relationships.”

During the Fall 2019 semester, Jolink followed 143 students, who filled out surveys about their potential newfound friends or partners at three days, one week, and approximately two months after the first meeting. Each study participant submitted information for an average of four new relationships — which provided Jolink with data on nearly 600 people.

In the surveys, Jolink asks specific questions related to affectionate touch, expressions of gratitude, and shared laughter to identify if these behaviors influence people to pursue friendships or romantic partnerships with others.

“Laughter, touch, gratitude — each independently predict this desire to get to know the person, which then forecasts actually having a relationship with them two months later,” she shares. “Not only does this lead to a relationship, but that relationship is high-quality.”

What’s more is these initial interactions are similar between friends and romantic partners — which speaks volumes to the benefits of being friends with someone before getting involved with them romantically. But these behaviors aren’t the only factors the play a role in whether a future relationship might occur, Jolink stresses. Attraction, shared interests, familial background, and other commonalities are still important.

Jolink is the first to admit these conclusions are premature and will continue collecting data from a new sample of participants through the end of 2022.

Bonds that boost the body

The next step for Jolink is understanding how high-quality close relationships feed into the body. Existing research suggests that having a tightknit social network boosts health long-term, she says. But how this happens remains unclear.

“We live for a long time — and it’s complicated,” she says. “But I think the small, positive, adaptive moments within close relationships over time probably contribute to things like cardiovascular health. This is a big claim, and we need to test it, but it’s just one idea.” 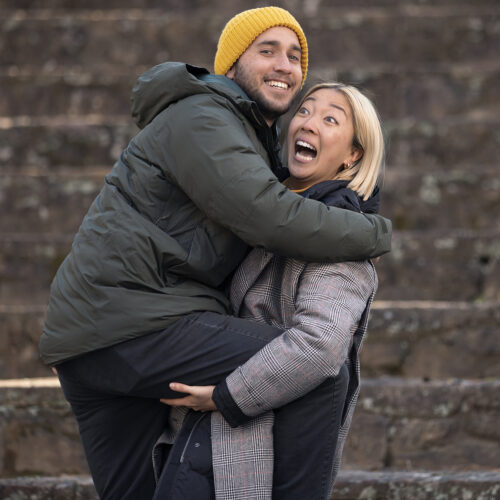 Alex and Amanda have been together since 2017 and got married in October 2021. (photo by Alyssa LaFaro)

Jolink couldn’t find any studies that examine the association between inflammation and social behavior, so she tested the idea by observing how people respond to others when undergoing a low-grade inflammatory response from a flu shot. Before and after the vaccine was administered, participants provided blood samples and completed a series of computer tasks that included questions about both support figures in their lives and strangers.

Jolink discovered that participants were more likely to approach people they are close to and avoid strangers, suggesting that inflammation influences both social withdrawal and engagement.

“This shows that even small increases in inflammation matter in everyday life,” she says. “Moments of psychological stress might induce a mild increase in inflammation in a similar way that the flu vaccine does — and that can affect our perceptions and behaviors.”

Jolink is engaged in additional studies on this topic and would eventually like to test how more severe inflammatory responses affect our social behaviors and to dig deeper into the long-term health effects of close relationships on the body.

“I believe to my core that good, close relationships help us survive — that they improve our lives and let us live longer,” she says. “I would love for the people in my life to live as long as they can, and if my research or my relationship with them is in any way helping, then that’s what I want to continue to do.”

Tatum Jolink is a PhD student in the Department of Psychology & Neuroscience within the UNC College of Arts & Sciences.