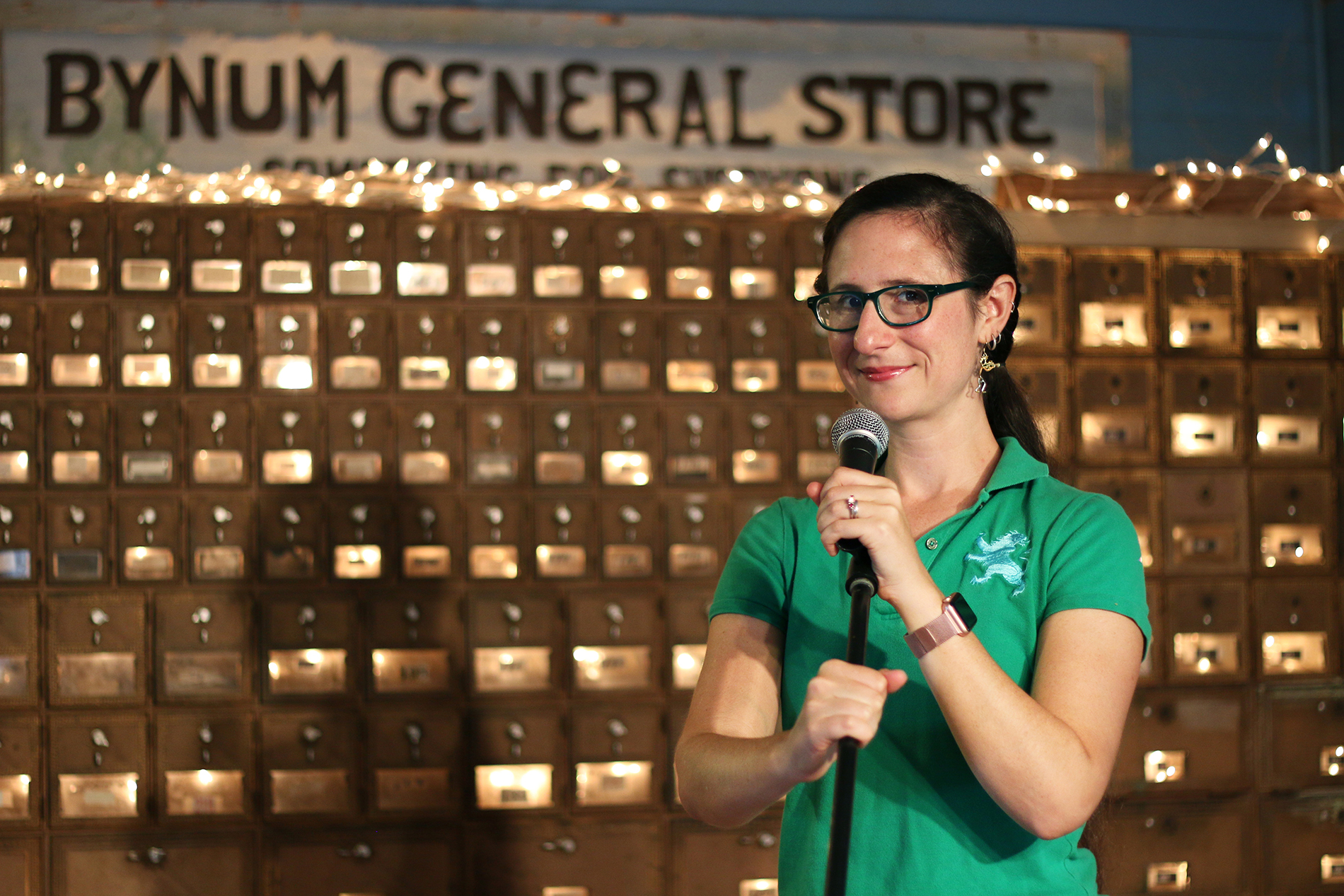 As the sun sets low over downtown Atlanta, neon signs light up the windows of Manuel’s Tavern. It’s a busy night for the popular bar; so busy, in fact, that Sarah Beth Nelson has to shuffle past the crowd to snag a seat. It’s her first time here, and she’s nervous — aware of the general idea, but not sure of exactly what to expect. She’s only heard stories from friends about what Manuel’s is like on Carapace nights.

Soon enough, Nelson finds herself holding a hat bursting with small pieces of paper, each one bearing the name of an audience member. With a hint of hesitation, she puts down her own name and passes it onward, watching in anticipation as it continues to fill. Eventually, it makes its way into the hands of a host standing in front of the crowd. With dramatic flair, he draws a name and calls it out loud:

“Sarah Beth Nelson! Come on up to the stage!”

Nelson is momentarily taken aback. Me? Already? But the surprise quickly gives way to excitement. She prepared for this — she’s a veteran storyteller. There’s a short smattering of cheers and applause as this first-time attendee walks up to the microphone. She turns toward the throng, whose soft murmurs dull into silence. She draws a single breath and begins to speak.

“Ever since I first learned about Mars when I was 4 years old, I always wanted to go there.” Nelson progresses through her story, sharing the humorous and nostalgic details of her experiences at Space Camp the summer after fourth grade. As the audience laughs along and leans in to listen, Nelson’s body language relaxes. She starts to feel at home.

Welcome to Carapace, a monthly storytelling event that showcases the short, true stories of people’s lives. Although she may not have realized it at the time, Nelson had stumbled upon a community that would shape the direction of her life as a community member, storyteller, and researcher.

An Atlanta native, Nelson grew up listening to and retelling stories — a passion that led her to a master’s program in library and information science at the University of Alabama. While between jobs in Georgia, she started attending meetings of the Georgia Storytelling Guild, the content of which focused mainly on folktales.

So when she heard about Carapace through friends, she was intrigued. And after attending, she was hooked. Each month, Nelson returned to Manuel’s ready to share her experiences with those who gathered to listen. “They really made me feel like I had stories to tell — that my personal stories were valued and that I was valued, too,” she says.

Carapace began in 2010 as a regional chapter of The Moth, a New York City-based storytelling organization best known for its award-winning radio show and podcast, “The Moth Radio Hour.” Chapters like Carapace aim to showcase personal stories through community events held at local hubs like Manuel’s. Covering a wide range of designated themes like “love,” “sanctuary,” “acting your age,” and “taboo,” the gatherings aim to open up opportunities for anyone and everyone to tell their stories.

“As a neighborhood bar, Manuel’s has this comfortable feel,” Nelson says. “On Carapace nights, there’s no raised stage, no special stage lighting, so you can easily see everyone in the room and it feels very conversational — like a party where most people there are your friends.”

That “comfortable feel” and exactly where it comes from are what Nelson hopes to better understand through her doctoral research on oral information sharing through the UNC School of Library and Information Science.

The field of library and information science tends to treat information like an object, separate from the bodies of those who share and interact with it, Nelson says. But then she points to events like Carapace, which reveal the ways in which information and its sources are deeply connected. The physical and emotional spaces created by storytelling communities, specifically, reveal these connections in real life.

“There are some big messages that come out of Carapace, especially when people are sharing stories about things that they wouldn’t normally talk about,” Nelson says. “There are people in the audience who are going through the same thing, who get that feeling of me too.”

In her research, Nelson sought to quantify that feeling. She interviewed 18 participants from six different Carapace events about their motivations and takeaways, noting common themes and emotions. One storyteller, Benjamin Carr, shared his perspective with her: “What makes Manuel’s a safe place is it’s all on the same level. It’s just another place that people can tread across. It makes you all feel familiar. Even when you’re talking about yourself and you’re saying something personal, you’re all just folks.”

Almost everyone Nelson surveyed mentioned the creation of a “safe space” that offered comfort in the shared vulnerability of storytelling. “There’s this drive toward facilitating vulnerability and allowing for these moments of beautiful connection that people can have,” Nelson says. 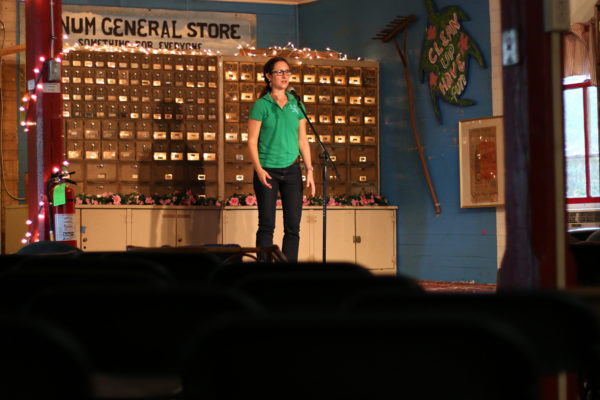 Although the human drive to tell and share stories is as old as history itself, Nelson believes that her research shows how designating a place in society for modern-day oral storytelling allows people to feel more comfortable in expressing authentic human emotion and empathy.

“Each individual story means something,” Nelson says. “For storytellers, it can be therapeutic to voice things that they haven’t had a platform for before, and for audience members, it’s therapeutic to know that other people have the same things going on in their lives.”

With her field work now complete, Nelson is working on her dissertation, which she hopes will culminate in an interactive public presentation to highlight the collaborative nature of personal storytelling and further educate the larger storytelling community about the importance of this art form.

“One of the storytellers I interviewed said something so beautiful, that the moral of every story is: I’m still alive,” Nelson says. “And that’s the thing. With even the most difficult personal stories, the ending has been given away. You know they lived through it.”

Sarah Beth Nelson is a doctoral candidate in the UNC School of Information and Library Science.