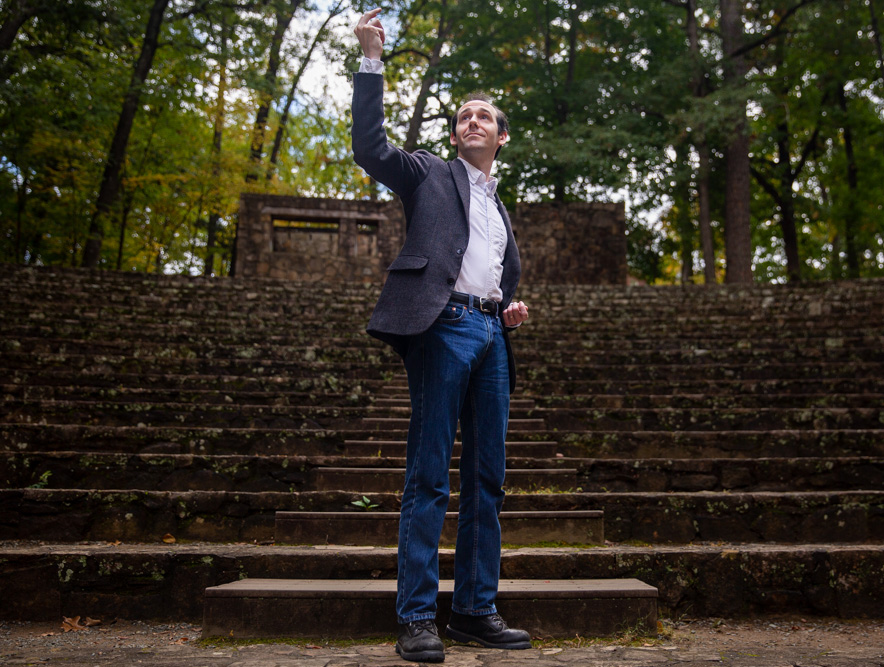 Bret Devereaux looks to the sky, eyes focused on his right hand, which is stretched upward. He straddles the aging stone steps at the Forest Theater and holds this position for a while — and then breaks form to gesture to his back leg.

“I should have a little Cupid by my foot,” he says. 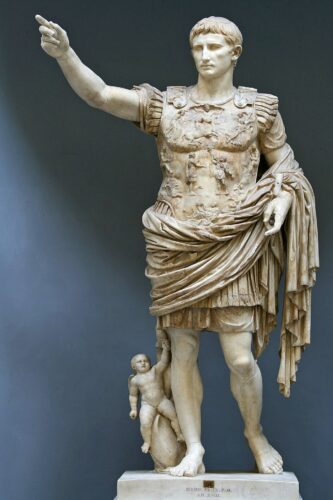 The famous statue Augustus of Prima Porta, featuring Cupid at his heels. (photo by Till Niermann, Wikimedia Commons)

Devereaux, an expert in ancient war at UNC-Chapel Hill, is obsessed with historical accuracy. Here, he emulates a famous statue of the first emperor of Rome, Augustus of Prima Porta. The statue implies that Augustus is divine, related to the goddess Venus.

“It was too bold, even for Augustus, to say he was a god,” Devereaux says. “So his wife had him keep the statue in her home.”

He briefly delves into the mechanics of a full-body marble statue, explains that part of the reason Cupid is at the foot is for stability, notes that the statue should be painted in “garish” colors because the Romans had horrible interior design skills, and then transitions into an impassioned and censored explanation of Roman graffiti.

Devereaux’s ability to animate a 2,000-year-old statue translates well to his classroom, where he engages his students by bringing historical moments and figures like Augustus to life.

A hand grazes the top of a golden field of wheat. Soft, haunting music plays. The scene — a flashback — snaps back to the present, and we see Russell Crowe’s face as he stands amidst his legion in the ancient Roman army.

This is a scene from the movie “Gladiator.” Devereaux pauses the film, hits rewind, and goes back to the shot of the hand and the grain. He is starting the lecture about Rome for Global History of War, but his first comment is about the height of the grain in the movie.

A measuring stick in hand, he pokes frantically at the screen projecting the image.

“That is wrong,” he exclaims.

The wheat in the scene is modern dwarf wheat, he says. It is what farmers grow now because it is more nutrient efficient.

His voice gets higher, more strained. The measuring stick is still in the air.  Some students laugh at his agitation, others look at their neighbors, eyebrows raised and grinning.

“You should have just seen his head bobbing through the wheat field, and presumably seriously irritating whatever farmer is working there.”

The day’s lecture isn’t on agriculture, and the clip is just a historical inaccuracy that Devereaux enjoys picking apart — one that likely would pop up on his Twitter feed.

“Very few of my students are going to go forward into careers in which their knowledge of the Romans is going to be immediately necessary,” he acknowledges. “But a history classroom is a particularly good place to think about how we argue for ideas.”

Far from being etched in stone, Devereaux’s teaching methods are dynamic. His 23,000-person Twitter following is one testament to his ability to turn history into stories, and the joy he gets from playing “The Great Chinggis Khaan” by Mongolian folk-rock band The HU at the beginning of a lecture about the Mongols is a testament to his historical humor.

“I believe that students will never be more excited than they think their teacher is,” Devereaux explains. “If that means that I look a little bit silly, that’s fine. If I have to put on a clown nose to make that happen, then that’s what I’m gonna do.”

While his social media pages cover a swath of topics relating to military history — from U.S. national security to battle analysis for “Lord of the Rings” — his passion and expertise lies with the Romans.

Devereaux earned his history PhD from UNC-Chapel Hill in 2018. His current research is an extension of his dissertation, a look at social and material costs to Roman warfare in the third and second centuries B.C.E.

Before it was an empire, Rome was a republic governed by two elected consuls. The early Republic was defined by political strife between plebeians, or common people, and patricians, the wealthy and powerful.

Beginning in the middle of the third century B.C.E., Rome took control of Italy and began projecting power into the Mediterranean, bringing it into conflict with the other Mediterranean great powers of the day: Carthage and the successors of Alexander the Great. By 133 B.C.E., Rome controlled Sicily, Spain, Northern Africa, Macedonia, and Anatolia.

The empire outgrew itself again and split administrative duties into east and west territories, which eventually became a permanent political division. At its peak, the empire spanned 2.3 million square miles, about the size of Australia.

The traditional explanation for their immense military success was the sheer number of people they were able to throw into a battle, Devereaux says.

“But I had questions. Okay, if you have all this manpower, what is it going to cost you to feed these guys? Pay these guys? Supply them and equip them?”

Devereaux searches for the answers in his current research project, an examination of what materials might have cost in the third and second centuries B.C.E., when the Romans began expanding their territory beyond the Italian Peninsula.

Though historians have delved into Roman history time and again, this research project has been an experiment in methodology.

Prices for material like iron or services like welding are not well-documented, and even they are, the odds that available records will be for the correct time period or even century are unlikely. To understand what a suit of chainmail armor costs, Devereaux needs to calculate how much iron was used and then compare it to other sets of armor from similar time periods.

“What we find is a fist-sized ball of rusted-together rings called a concretion — hollow tubes of rust that have formed around the iron rings, which are now gone,” he says.

So Devereaux has enlisted the help of a materials science engineer to recreate those rings using software. The program can tell Devereaux how much iron a craftsperson would need to make a chainmail shirt or a spearhead.

“It was really a question of figuring out the original shape, because rust has a lower density than iron. If you take a certain amount of iron, it will expand as it rusts,” he shares.

Once he has an estimate of the amount of iron in a Roman artifact, he can compare it to artifacts from Rome’s major opponents of the period: Carthaginians, Gauls, Iberians, and Macedonians.

“The punchline of this is that, far from being sort of cheap and expendable, Roman soldiers were unusually well-equipped,” Devereaux says.

This is probably because Roman soldiers were responsible for equipping themselves until the first century B.C.E., Devereaux says, and the individual soldier is likely to put a higher value on their own life than a king might.

Devereaux’s research revises the way we understand the success of the Roman military, which mobilized a huge amount of resources. This redirects historical attention from sheer numbers to the system of alliances the Romans maintained.

The Roman republic fell 2,049 years ago, and the empire split 1,546 years ago, so why is research on the Romans ongoing?

“I think it feels particularly relevant sitting in the United States at this moment,” Devereaux says.

Just as the Romans were the hegemonic power in their region, he explains, the United States is in a similar position.

Students have noted the similarities in class, pointing out that the Romans had a fragile government built for one city and found themselves ruling an empire. They’ve observed that the U.S. government is also fragile for its size in the sense that it was designed for an 18th-century rural community.

“The U.S. is certainly not unopposed, but as one of the leading powers we have to ask questions about how we will conduct ourselves on the world stage.”

The Romans succeeded at “fostering buy-in” among the subjects they conquered, despite conquest often being a violent and unpleasant experience.

While Devereaux doesn’t suggest that the United States emulate the Romans, he believes we can study them to learn how a large power can be successful in the international sphere, but in an ethical way.

“And, of course, we live in a democracy,” Devereaux says. “This isn’t a choice that can just be left to our leaders. This is a choice we have to make for ourselves.”

But Devereaux’s classes are also impacting students much closer to home.

He recalls a student approaching him near the end of the semester a few years ago. The student told Devereaux that he had served in Afghanistan and was taking the survey warfare class to understand the context of the war he had fought.

“He thanked me for teaching the course, which I thought was a very sort of humbling experience,” Devereaux remembers. “I mean, who am I to provide that kind of context for something so momentous?”

Bret Devereaux is an alumnus and visiting lecturer in the Department of History within the UNC College of Arts & Sciences.