“It begins with curiosity. Curiosity about a process. And then a question about that process. And then a hypothesis that will lead to an experiment that will provide results and data to interpret. What I love about this process is that my hypotheses are often wrong. And that’s really exciting — because no human being is smart enough to understand biology at a level of molecular detail where their hypotheses are always right.”

-Bob Duronio, director of the Integrative Program for Biological and Genome Sciences

Robin Armstrong adjusts the focus on her dissecting microscope. Iridescent ovals float in the ether, clumped together, stark against a black backdrop. They look like the little, individual fibers that comprise the flesh of a grapefruit — long and plump and juicy. Though this grape-shaped bunch is far from produce, it’s fitting that they belong to a fruit fly. Armstrong is examining its ovaries. 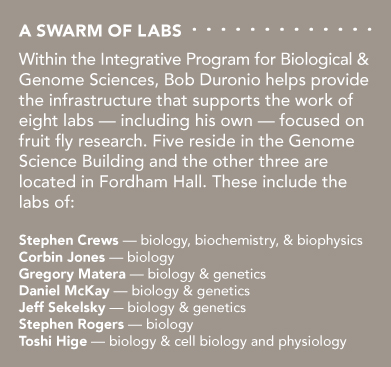 “These giant cells down here are nurse cells,” she says, motioning to the shimmery blob she just removed from her specimen with tiny forceps. She points to a gap. “And that’s where the developing egg cell is. This is my favorite stage of fruit fly reproduction — there is some pretty cool biology that happens here.” Armstrong, a PhD candidate in the UNC Curriculum for Genetics and Molecular Biology, studies fruit flies in the Duronio lab to uncover how DNA replicates inside cells.

The intricate, specialized processes of DNA — things like replication and repair and segregation — work, essentially, the same way between fruit flies and humans at the molecular level. In fact, fruit flies share approximately 75 percent of the genes that cause disease in humans, making them a perfect tool for scientists to study human gene function. And the more we know about how genes function, the easier it becomes to develop medicines that can treat a variety of diseases.

To understand how fruit flies help us find treatments for human diseases, it’s important to first understand cell division — a fundamental mechanism for all life. Remember learning about mitosis in sixth-grade biology? The process begins with a parent cell, which splits into two, identical daughter cells.

But this doesn’t always go according to plan. When a cell divides incorrectly or at the wrong time, diseases like cancer can occur.

“For normal animal development to occur, meaning the healthy maintenance of functioning organs, there needs to be just the right amount of cell division — but not too much — at the right time and in the right places,” UNC geneticist Bob Duronio says.

Human disease can happen when control over the time, place, and/or amount of cell division is lost. A lack of division can lead to disease — but an exponential increase can as well. Think of it like “Goldilocks and the Three Bears,” says Duronio. “It has to be just right.”

Biologists refer to species that are studied to better understand human biology as “model organisms.” Fruit flies fall into this category, as hundreds of labs across the country dedicate their research to these tiny beings. In the Genome Science Building, alone, six labs focus on fruit fly research. “Even though they’ve been studied for over a hundred years, there are still people in the biomedical community who say, Why do you work with fruit flies?” Duronio says. “Part of my job is to explain that.”

Beyond genetic similarity, fruit flies are relatively low-maintenance organisms — they’re small but big enough to see under a microscope, reproduce quickly and abundantly (a female fruit fly lays between 750 and 1,500 eggs in her lifetime), and only need their food changed every 10 to 14 days. Plus, they’re easy to “push.” 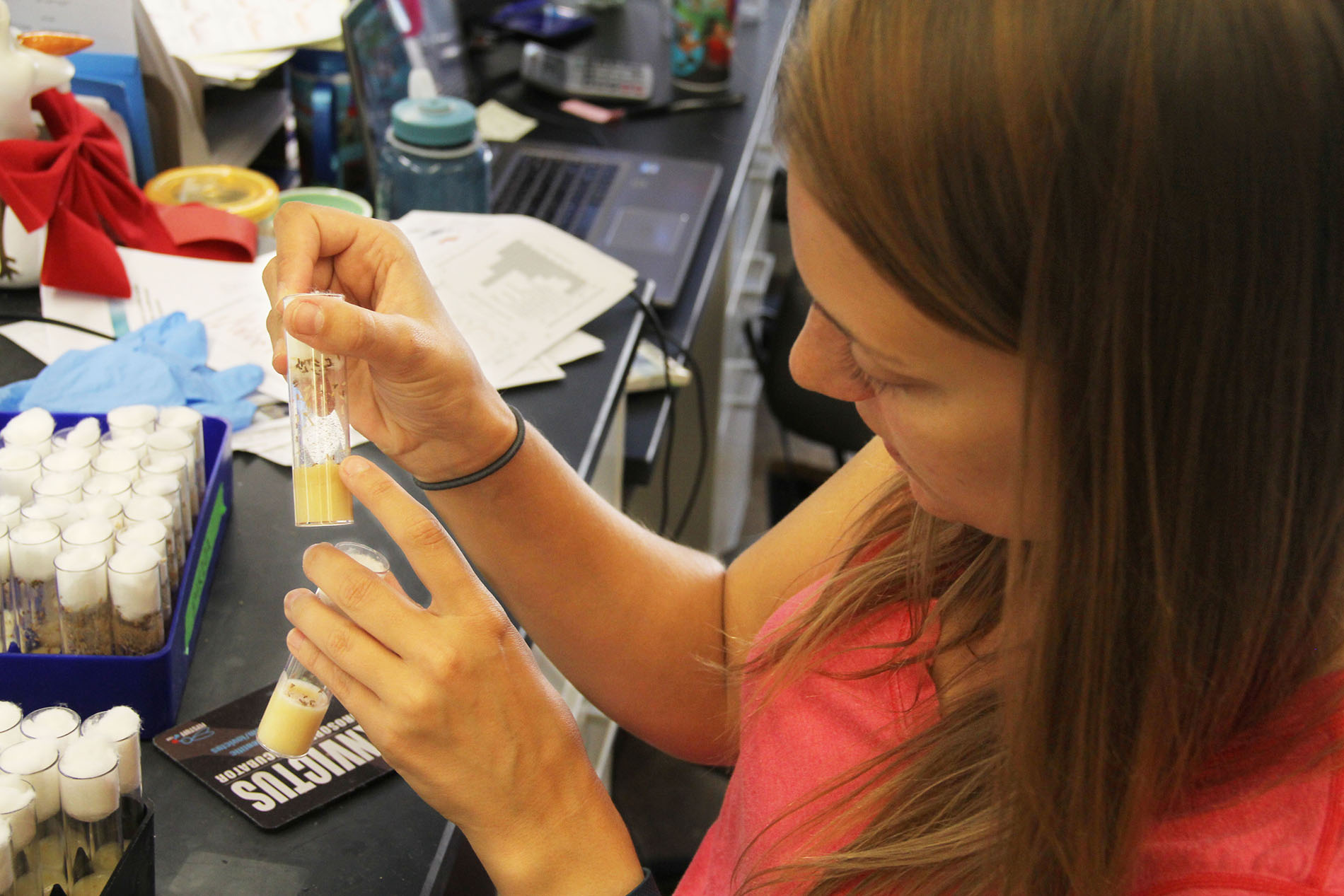 Because fruit flies are millimeters in size, researchers can raise thousands of them at once. They’re kept and maintained in vials, explains PhD student Robin Armstrong, who’s studied fruit flies since she was an undergraduate researcher at Tufts University.

“If you ever hear the term ‘fly pushing,’ that literally means we’re pushing them around under a microscope,” Armstrong says, chuckling. The term stems from the physical action occurring under the microscope, as researchers push the flies around to identify specific traits like eye color and bristle shape, which they use for genetic crosses. “Now it generally means the act of fly genetics — because we always have to sort flies for our crosses,” she says.

Thousands of genes within our genomes are packaged into chromatin, a mixture of DNA and histone proteins. Think of the latter as a scaffold the DNA wraps and compacts itself around. “The relationship between DNA and histones is very intimate,” Duronio says. “It’s like the paper you write letters on. The letters are the code of your DNA and the paper is the histone that holds the information and influences how you interpret the DNA.”

Cells need the ability to replicate and divide accurately and efficiently — and when they can’t, “bad things happen,” Duronio says.

To figure out why bad things happen, researchers in the Duronio lab purposefully mutated a histone to observe how it affects the function of a genome. “The process can be done in single-cell organisms like yeast, but it couldn’t be done in any type of plant or animal — including worms and mice — until we devised the technology to be able to do it in fruit flies,” explains Duronio.

Because fruit flies carry more than 200 histone genes, Duronio and his colleagues Greg Matera, Dan McKay, and Brian Strahl needed a way to mutate all of them simultaneously. They spent five years developing a strategy to do exactly that, using engineered gene clusters to replace an entire family of histones. “It became a tool we can use to ask lots of different questions about how our genome functions,” he says. “It’s birthed a lot of projects.”

One project in the Duronio lab, for example, developed around the hypothesis that a mutated histone prevents DNA in a genome from properly replicating and repairing itself. To test it, the lab chose to focus on fruit fly larval tissue, which contains cells that transform into the wing and part of the thorax. Armstrong, with PhD student Taylor Penke, spent more than 10 hours dissecting upwards of 600 fruit fly larvae for analysis. “After that, we had approximately 5 million cells to manipulate,” Duronio says.

To “manipulate” the cells, the researchers extracted and sequenced all of the DNA in their genome. They discovered that the fruit flies’ DNA continued to replicate itself well, overall, as if no mutation had occurred. “This was our ‘aha’ moment,” Duronio says. “It didn’t work the way we thought it would — but that helped us develop another set of questions and avenues of research to test new hypotheses.”

Does a histone mutation result in DNA damage that can’t be repaired properly? Or does it cause abnormal replication, leading to gene function problems? Currently, the Duronio lab is collecting data to, hopefully, find some answers. 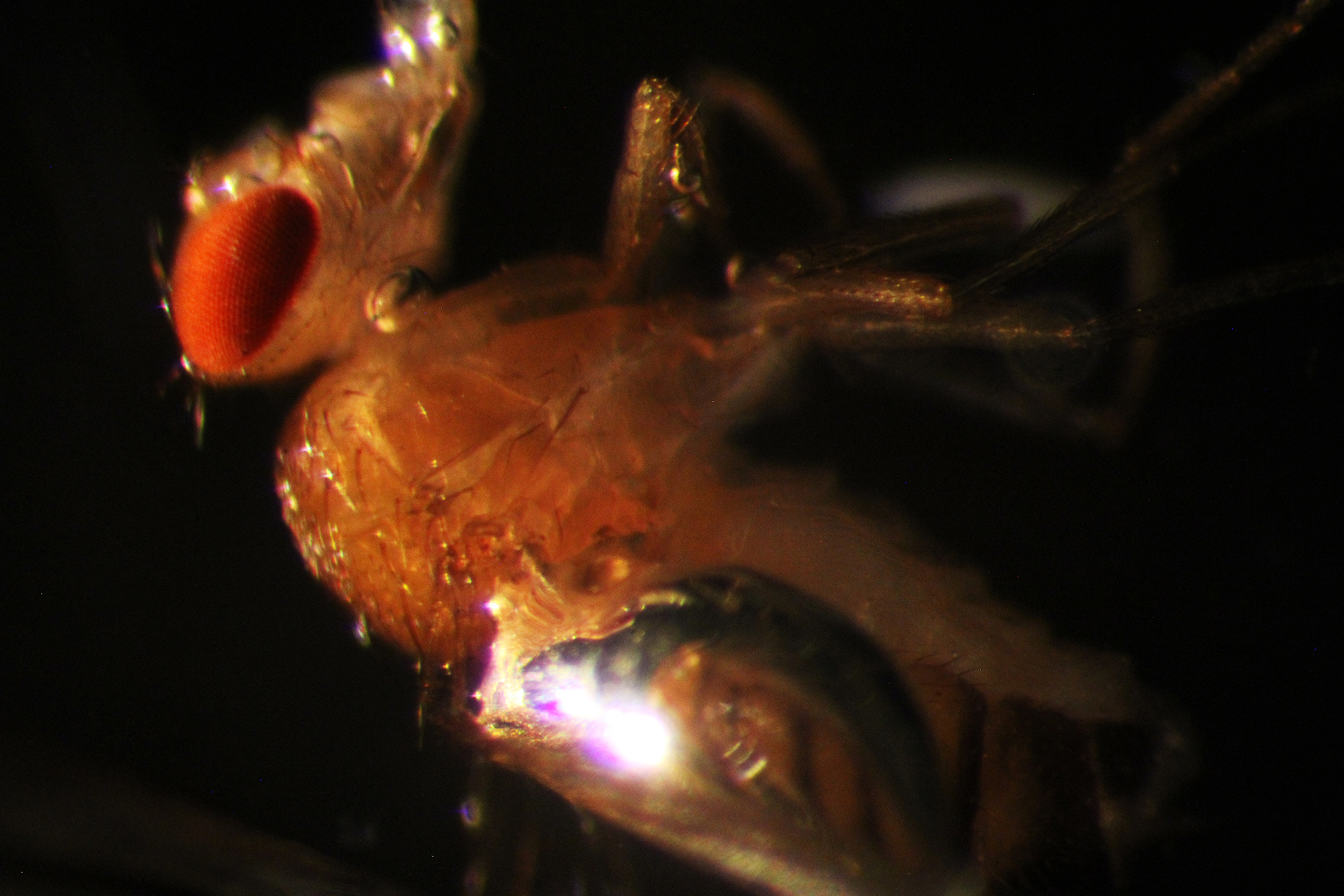 Beyond sharing genetic similarities with humans, fruit flies are fascinating critters. They can beat their wings 220 times per second, which allows them to make 90-degree turns when flying, and their eyes have 760 individual lenses.

Beyond his own lab, Duronio also directs the Integrative Program for Biological and Genome Sciences (iBGS). Redeveloped in 2012, iBGS stems from the Program for Molecular Biology and Biotechnology (PMBB) that began in 1981, shortly after scientists started cloning DNA.

“PMBB was conceived by the School of Medicine in partnership with the College of Arts & Sciences to bring molecular biology to UNC,” Duronio explains. “It was the unit that helped establish and promote DNA cloning and sequencing technologies at Carolina.” Duronio gives much credit for the program’s success to his iBGS colleague and collaborator Bill Marzluff, who directed PMBB from 1991-2012.

Today, iBGS hosts more than 20 basic scientists from across the university to study biological and genomic processes in model organisms like frogs, mice, worms, fish, mustard plants, and of course fruit flies.

UNC geneticist Frank Conlon, for example, studies African clawed frogs to identify the molecular networks essential for early heart development and how mutations in these networks lead to congenital heart disease. Matthew Redinbo, on the other hand, focuses on biology from a chemical and structural perspective. He and his lab manipulated bacteria to learn how to minimize the side effects of chemotherapeutics for colon cancer.

Using mice and zebrafish as models, biologist Victoria Bautch observes how blood vessels form and pattern during development — and how the disruption of those processes lead to disease. And just this month, neuroscientist Toshi Hige joined the team at iBGS to continue his research on learning and memory in the simple brains of fruit flies. Such observations will help glean new knowledge on human brain behavior, synapses, and circuits.

“As long as we don’t fully understand biology — which we don’t because it’s complex — organisms like fruit flies are going to give us a higher probability of making a discovery that has impacts across all biology,” Duronio says. “The information we get from studying these organisms help us understand the human condition.”

Robin Armstrong is a PhD candidate within the UNC Curriculum in Genetics and Molecular Biology and a graduate research assistant in the Duronio lab.

Greg Matera is a professor and associate chair of the Department of Biology within the UNC College of Arts & Sciences. He is also a member of the Integrative Program for Biological and Genome Sciences, as well as the UNC Lineberger Comprehensive Cancer Center.

Brian Strahl is a professor and vice chair of the Department of Biochemistry and Biophysics within the UNC School of Medicine. He is also the faculty director for the UNC High-Throughput Peptide Synthesis and Array Facility.

Matthew Redinbo is the Kenan Distinguished Professor of Chemistry, Biochemistry, and Microbiology. He holds a joint appointment between the UNC College of Arts & Sciences and the UNC School of Medicine, and is a member of the Integrative Program for Biological and Genome Sciences.

Victoria Bautch is the Beverly Long Chapin Distinguished Professor and chair of the Department of Biology within the UNC College of Arts & Sciences. She is also a member of the UNC Lineberger Comprehensive Cancer Center and the Integrative Program for Biological and Genome Sciences.