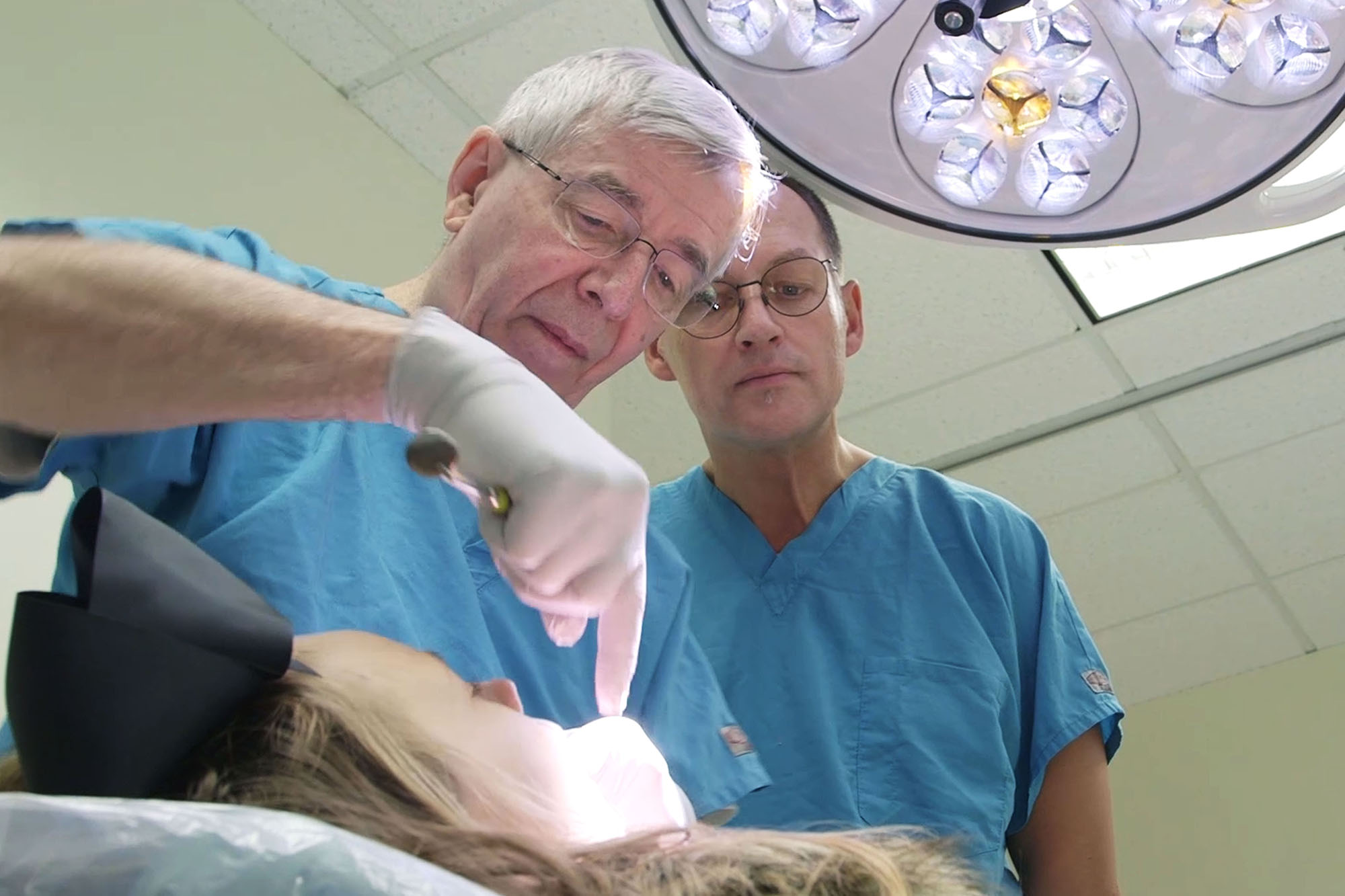 Last year, Roberta Griner spent 120 days at the dentist. Her three daughters all needed major work on their teeth. Victoria, her middle child, had a particularly tricky situation: Her front tooth was growing backward, toward her nasal cavity. The 9-year-old was in a lot of pain, so their pediatric dentist and orthodontist, Sonny Long, recommended its removal.

“He told us she would never have a tooth there,” Griner says.

To temporarily solve the problem, Long inserted a false tooth held in place by wires attached to the back molars. “The moment he put that tooth in her mouth — her smile brightened in every single photo I took of her after,” Griner says. “It made a huge difference.”

There’s a psychological component to consider when a child loses a tooth, especially in the front of their mouth. “We’ve done some studies about the psychological impact of your teeth and your smile. It is an awkward time just in general to have that added burden — it can affect you for a very long time,” says Jessica Lee, a UNC dentist and chair of the Department of Pediatric Dentistry.

Beyond psychology, technical problems also ensue when children lose teeth unexpectedly. Dentists can replace the missing tooth with a temporary one, but that replacement won’t develop as the child grows. 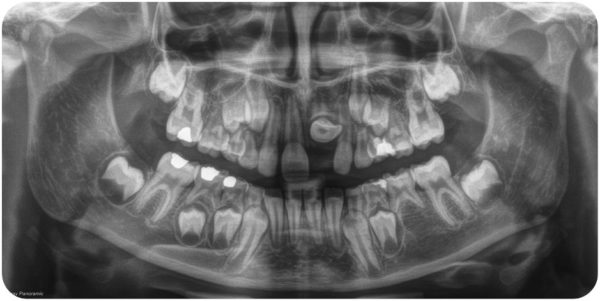 This X-ray shows how Victoria’s left front tooth, which wasn’t outwardly visible in her smile, was impacted and growing upward toward her nasal cavity. I image courtesy of Sonny Long

Thankfully, Long, Lee, and a dental team at UNC had been corresponding with Pawel Plakwicz, a Polish oral surgeon who was practicing an innovative technique called autotransplantation — when a “throwaway tooth,” like a premolar, is removed from the mouth and implanted in the location of the missing tooth. Plakwicz first learned of the procedure 18 years ago, when his colleague Ewa Chzochrowska invited him to Oslo to learn how she was using the procedure to treat growing patients.

“I’d seen kids without any chance for treatment for years,” Plakwicz says. “This is a special group of patients. This is a very sensitive group. These are decisions that are made for their whole lives. We are responsible for choosing the proper option to treat this.” 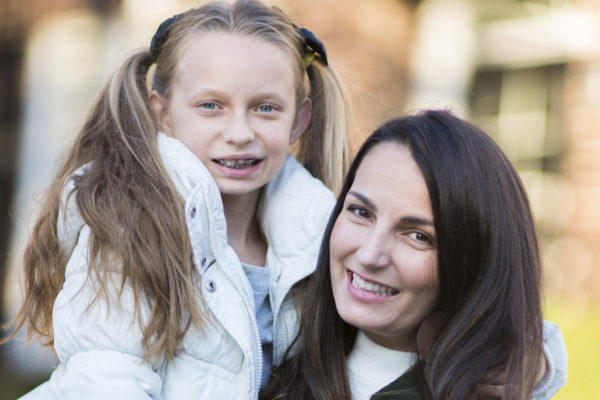 Victoria (left) and Roberta Griner I photo by Ben Premaux

In January 2018, Plakwicz traveled from Warsaw to Chapel Hill to teach the Department of Pediatric Dentistry how to autotransplant a tooth — and Victoria, now age 10, became one of the first two people in the United States to benefit from the procedure.

“Millions of teeth are taken out every year for orthodontic reasons like wisdom teeth removal,” Lee explains. “So we thought, let’s put them to good use.”

Be your own donor

When a person undergoes organ failure, a doctor will probably suggest a transplant — when a partial or entire organ from a heathy person is removed and then inserted into the sick patient. For tooth autotransplantion, though, the patient is their own donor.

“If you needed a heart, well, you only have one of those,” Lee says. “But we have multiple teeth. So autotransplantation is self-donation. Basically, we move one of your teeth to another location in the mouth, and the body takes it just like an organ.”

In her two decades at UNC, Lee has seen multiple cases where a child’s adult tooth has been knocked out after traumatic events like falling off a bicycle or getting hit with a baseball. Finding a solution for these problems is always difficult, Lee says, because these kids still have a lot of growing to do. A false, temporary tooth will have to be regularly changed out as the child develops, and implants in adulthood have their own disadvantages such as bone loss in neighboring teeth.

But an autotransplanted tooth lasts for a lifetime.

“If you put in an implant, it doesn’t have the capability of growing,” Lee explains. “With an autotransplanted tooth, though, the bone grows, the jaw grows — everything grows along with the tooth. It’s pretty remarkable.”

Teeth roots teem with periodontal ligament (PDL) —a fibrous tissue that connects a tooth to the surrounding bone — and stem cells, which replenish dying cells and regenerate damaged tissue. When a tooth is transplanted to another location in the mouth, its PDL induces enough bone growth to root the tooth in place and then the stem cells regenerate the pulp. While the concept seems simple enough, the process is not.

Before removing the donor tooth, the socket it will be transplanted into needs to be reshaped to fit the root of the new tooth. But how can Lee and her colleagues achieve this without the tooth itself? They take images of the tooth in the mouth and create a 3D-printed version of it to use as a model to build the socket.

“It’s amazing that we’re able to do that,” Lee says. “The technology that’s available today wasn’t a couple of years ago.”

Once the donor tooth is removed, it must be immediately inserted into the restructured socket or else risk damage — the changes in pressure, pH, and moisture that occur during this process can harm the PDL and stem cells needed for growth. For the next three weeks, the tooth must be monitored regularly to track progress and check for infection. It takes years for the tooth to fully develop — and dentist visits to make sure it’s doing so properly — but once it does, it is filed and reshaped to match the other front teeth.

The key to success here is teamwork, according to Plakwicz. It takes a pediatric dentist, orthodontist, oral surgeon, and prosthodontist to complete the full procedure. “The surgeon cannot plan the treatment by himself,” he says. “The bigger the group of dentists aware of transplantations, the sooner the best results, because it takes years to get the group together and to know how to do this.”

UNC Health Care has the only pediatric dental trauma center on call in North Carolina — making it the perfect place to introduce such an innovative procedure. It also means Lee and her team have seen all sorts of tooth loss in children and have long been motivated to find alternative solutions for replacement.

The pediatric dental team is collecting referrals from dentists across the state for patients who might benefit from autotransplantation, and Lee recently began a research project to develop an evidence-based, clinical protocol for teaching the procedure. Once that’s complete, she hopes to share it with colleagues at universities in the Midwest and on the West Coast, creating hubs across the nation.

While there’s no doubt autotransplantion will eventually spread to practices across the country, Lee remains curious about why it’s just now coming to the U.S. — especially since doctors in Europe have been practicing it for decades. To learn more, UNC pediatric dental resident and master’s student Anastassia Dokova has been interviewing local doctors to uncover the barriers to utilizing the procedure and develop solutions to overcome them.

“We’re still really confused on why this hasn’t been adopted,” Lee admits. “It has good science and biological procedures behind it.” A rush of referrals have already come in from across the state, she adds, stressing the need for this innovative procedure.

Looking ahead, Lee believes that tooth autotransplantation has other potential applications. It could, for example, treat cleft palates, when there’s a split or opening in the roof of the mouth. “What if a tooth could induce some of that growth?” Lee wonders. “The more we understand that pathway of how an autotransplanted tooth works, the more applications we might have. This could be applied to a lot of areas of medicine.”

A patient in Scandinavia, for example, experienced a trauma that required a small section of bone be removed from the jaw. But after autotransplanting a tooth, the bone grew to the point where it fully rebuilt what was missing. Lee even notes the potential for replacing bone in patients who have had sections of their jaw removed from oral cancer.

“This has indications beyond dentistry,” Lee says. “If we can understand all the biological mechanisms happening here, why can’t we apply it to other things? Autotransplantation is one of the most groundbreaking procedures I’ve ever seen — and I’ve been doing research for 20 to 25 years. This is a complete shift from what we’ve been doing. There’s just so much we don’t know. This is just the beginning.”