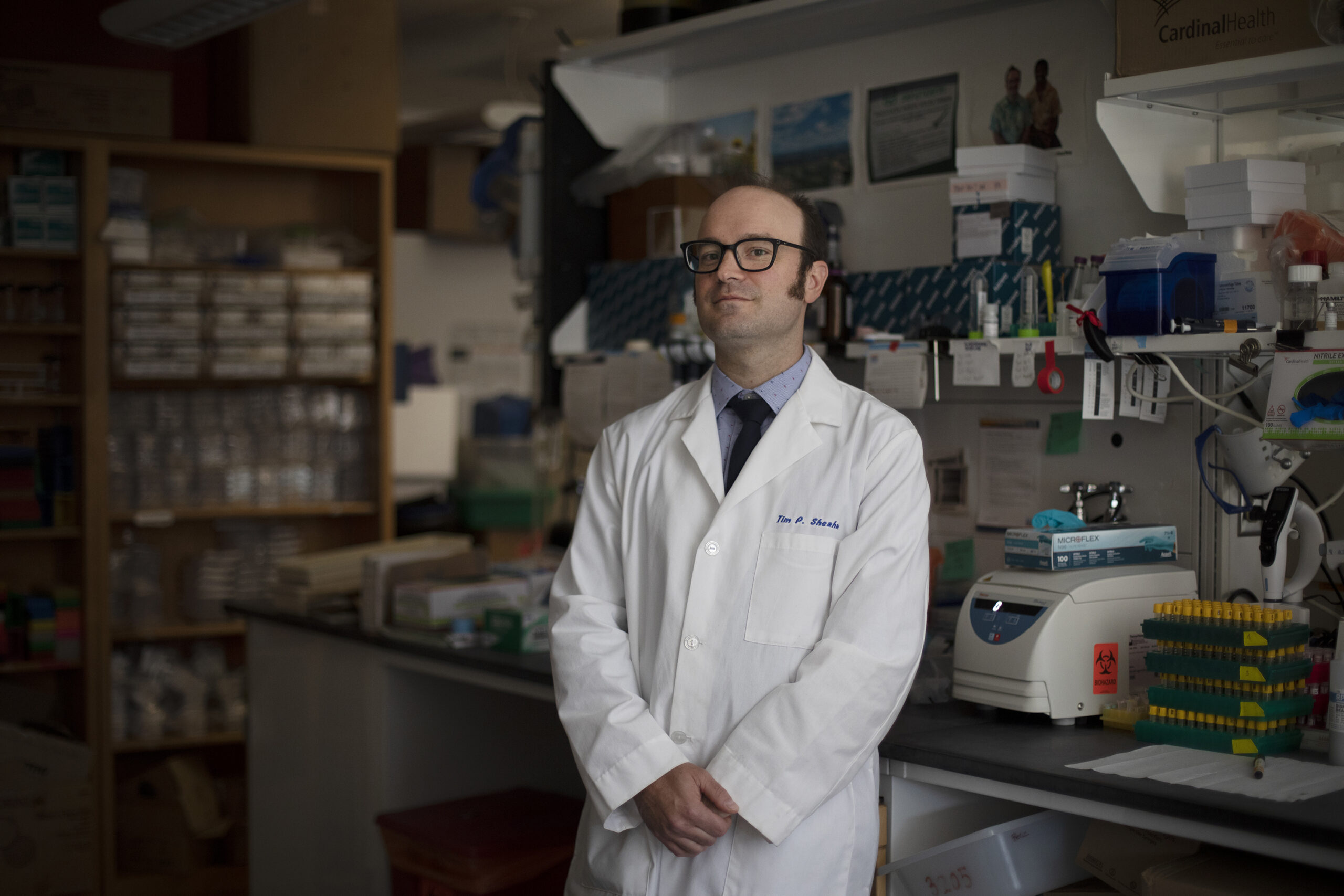 Timothy Sheahan has been studying coronaviruses for nearly two decades. (photo by Megan May)
By Alyssa LaFaro
Health | Society

Long before the novel coronavirus began its spread across the world, Ralph Baric and Timothy Sheahan were suiting up in full-body protective equipment. Baric, in particular, has been studying coronaviruses for nearly four decades. He developed genetic systems to manipulate first SARS coronavirus in the lab, which affected nearly 10,000 people in China and Hong Kong in 2002, and conducted similar research when the Middle East Respiratory Syndrome, better known as MERS, was first reported in Saudi Arabia in 2012. Earlier this year, his lab became one of the first in the U.S. to receive a sample of SARS-CoV-2.

Sheahan has been interested in coronaviruses for a long time as well. The 2002 SARS outbreak caught his attention while working as a lab technician at Harvard Medical School and Mass General Hospital. At the time, he’d already been researching graduate schools and soon stumbled across the Baric Lab. He began working there as a PhD student in 2003. Now an assistant professor, Sheahan continues to collaborate with Baric, studying coronaviruses and, specifically, striving to create vaccines and drugs to stop them.

Thanks to a partnership with biotech company Gilead Sciences, Baric and Sheahan were already testing a drug to combat coronavirus replication before the one that causes COVID-19 hit the world. Remdesivir was first used as an antiviral to treat patients with Ebola virus, and it was Sheahan and Baric who discovered that it could also work against all coronaviruses they tested including SARS-CoV-2. Their studies supported the use of remdesivir in the first U.S. COVID-19 patient.

A trial led by the National Institutes of Health showed that remdesivir effectively improved recovery times for people battling the respiratory illness, which led to emergency use authorization by the FDA. Now, it’s become a standard of care for treating COVID-19 patients. An analysis from Gilead suggests it reduces the risk of mortality by 62 percent, an important finding that requires confirmation in additional clinical trials, according to Baric.

“It’s so gratifying to see the work we’ve done at UNC help pave the way for this drug to be used in humans,” Sheahan says. “I’m really proud of our team.”

Endeavors spoke more with Sheahan about other drugs they’re testing, new discoveries, and the challenges that come with studying a virus like SARS-CoV-2.

Endeavors: What other antiviral drugs is your lab testing?

Timothy Sheahan: We did preclinical testing for EIDD-2801, an antiviral drug similar to remdesivir that is now in Phase II clinical trial at UNC. We’ll hopefully know this fall if this drug is doing what we hope — knocking down viral loads in COVID-19 patients. Unlike remdesivir which is now an I.V. drug, EIDD-2801 is an oral drug. If it proves to be effective and safe, it could be something that you get at the drug store. A widely available antiviral drug taken at the right time in one’s disease course could prevent the development of severe disease and hospitalization and even diminish spread. This drug is still in the early stages, but it’s promising. It’s also exciting that the preclinical work to enable human clinical trials was done at UNC and that the clinical trial is also taking place here. UNC is literally a lab-bench-to-bedside one-stop shop.

We also demonstrated that pegylated interferon-lambda — an existing antiviral used to treat patients with hepatitis D, a serious liver disease — is effective at blocking SARS-CoV-2 replication in cell cultures and in mice. It is currently in clinical trials at several sites.

E: What new knowledge have you uncovered about SARS-CoV-2 since the pandemic began?

TS: We showed that SARS-CoV-2 was susceptible to the antiviral effects of both remdesivir and EIDD-2801. Ralph’s lab, with Ric Boucher’s lab, showed that cells from a person’s nose replicate SARS-CoV-2 better than cells from deep in the lungs, suggesting that the cells the virus targets in the respiratory tract may drive the relative efficiency of transmission. Since the virus seems to replicate better in the cells in the upper airway, this likely makes transmission easier than if the virus targeted cells deep in the lungs.

Ralph’s lab also created a genetic system to manipulate SARS-CoV-2. This has led to the creation of viruses that facilitate the high throughput screening of human blood serum for neutralizing antibodies. These are the antibodies that attach to the virus and prevent it from infecting cells. This testing system, developed at UNC, has been essential for the screening of human serum from the frontline COVID-19 vaccines in the U.S. including the Moderna vaccine, which is about to head into Phase III clinical trial.

E: What are the continued unknowns of SARS-CoV-2 and how are you working to uncover them?

TS: It is not known why some people get sick and others do not, why older people are more susceptible to severe disease, and what kinds of combination therapies will be most effective at treating people with COVID-19. We are developing animal models to determine the importance of host genetics in susceptibility and resistance to COVID-19, as well as age-related disease severity. We are testing combinations of therapeutics to see if we can improve upon the activity of single agents such as only administering remdesivir.

E: What is the most pressing SARS-CoV-2 project that you’re currently working on?

TS: Testing combinations of therapeutics to see if we can improve upon the activity of single agents. The goal is to extend the window within which we have to treat people with COVID-19. Ideally, we’d have a treatment regimen that could be given across many days during the first week of symptoms. With more effective treatments we can save lives, shorten hospital stays, and maybe even prevent people from going to the hospital in the first place. This would be a huge win for public health.

E: What has been the biggest challenge for studying SARS-CoV-2?

TS: The work is incessant. There is so much work and never enough time to do it. It seems like there is no end in sight to this, either. Our team is working so hard, but we are trying to transition from sprint mode into marathon mode. What we are doing could have a direct impact on saving lives. So, the pressure to continue is a bit heavy. You can’t just stop working on this. At the same time, this is a unique situation and an opportunity for us to use our skills as virologists in a way that I never ever thought would be possible. Our pipetting has a direct impact on people’s lives. I never imagined that what we do would be so useful and translational to public health. It’s incredibly gratifying.

E: What positive news do you see in all the research you’re doing?

TS: I think this whole experience has made people acutely aware of infectious diseases and the fact that viruses like SARS-CoV-2 have no regard for geography, the color of your skin, what language you speak, or whether or not you are a saint or a sinner. I see this as a positive. It’s like Earth has been forced to take a virology class. This has taught people basic public health skills they will carry with them their whole lives. My kids know more about virology than I ever thought they would. Hopefully, this experience will help convince society of the importance of basic science research and the need to create broad-based vaccines and therapeutics to prepare for the emergence of SARS-CoV-3 and SARS-CoV-4.

TS: I would like to play my guitar more in the future.

Timothy Sheahan is an assistant professor in the Department of Epidemiology within the UNC Gillings School of Global Public Health.