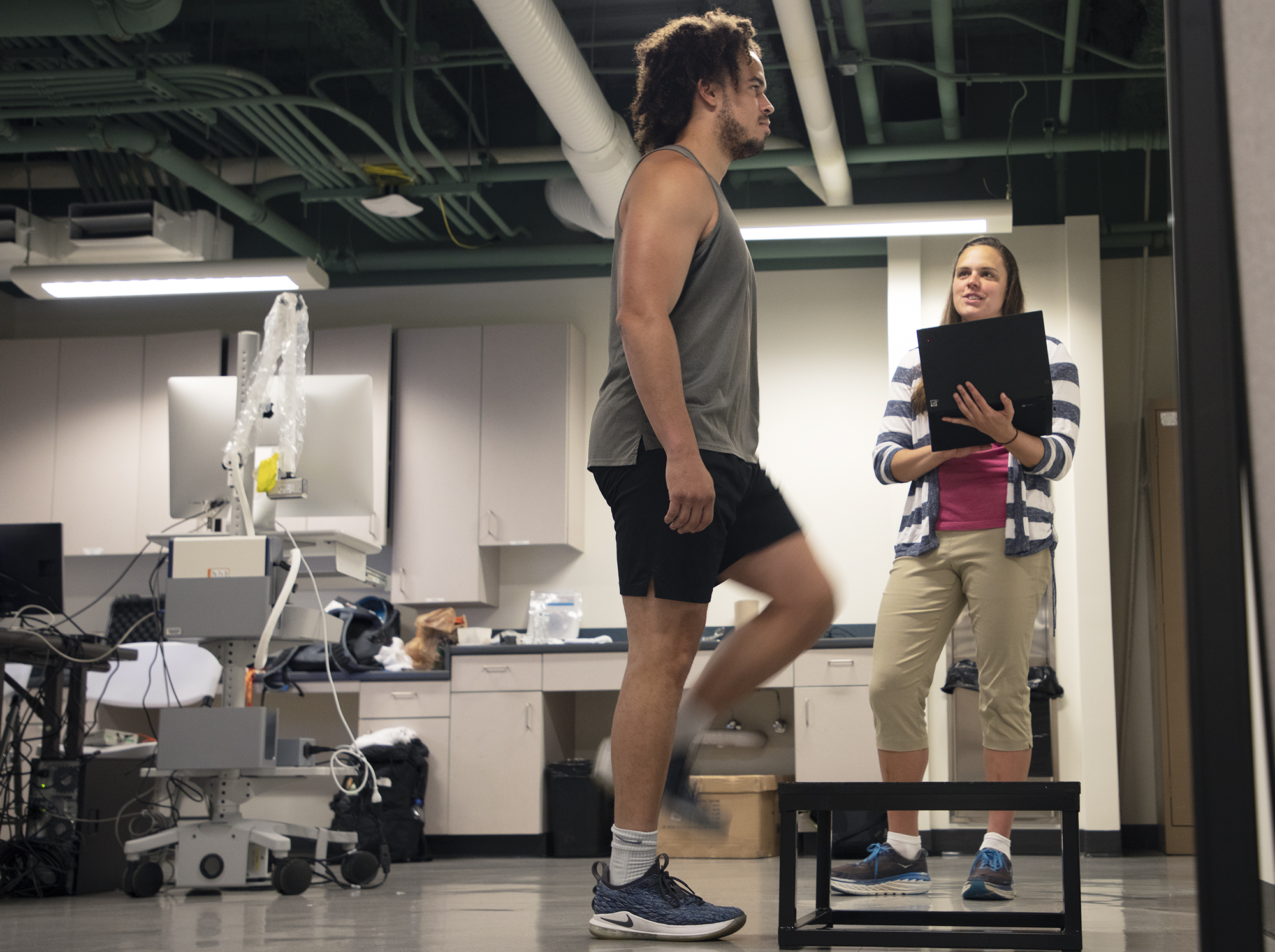 photo by Alyssa LaFaro
Julianna Prim (right), a fourth-year student in UNC's human movement science program and Karen McCulloch's research assistant, completes pilot testing for an upcoming project at Fort Bragg. She monitors the heart rate of physical therapy student Ryan Brooks, as he steps up and down on a platform. When applied to someone who’s had a concussion, their heart rate can struggle to adapt during exertion.
By Alyssa LaFaro
Health | Society

The hum of engines lulls the plane’s passengers. It’s midnight, but the weight of their gear and adrenaline building in their bodies keeps them wide awake for the long morning of training exercises ahead of them. They wear green backpacks laced with yellow static lines, which unravel their T-11 parachutes as they head out into the darkness, one by one.

The summer air hits Caroline Cleveland’s face as she falls 1,250 feet toward Earth. Her chute carries her carefully but quickly. She propels toward an open field at Fort Benning and lands with a hard thud — her helmeted head smacks the turf.

“I just laid there on my back for a couple of seconds, looking up at the night sky, contemplating the cliché of why we jump out of perfectly good airplanes,” Cleveland says, chuckling.

Paratroopers in the U.S. Army make 10 to 15 jumps a year. It is a requirement of their training — and just one of many exercises that can lead to concussions. Jumps, blasts, and gunfire all have the potential to damage the brain.

At the time of her jump in 2008, Cleveland didn’t consider concussion as a possible injury amidst the more visible threat of broken bones and sprained ligaments taking center stage in landing zones. She recalls being asymptomatic — but, in hindsight, she also considers herself lucky for being at low risk of getting a compounding second concussion because she had a week of downtime to rest.

Since then, the former U.S. Army captain has completed her doctorate in physical therapy at UNC, a program she learned about while still active duty in 2013. 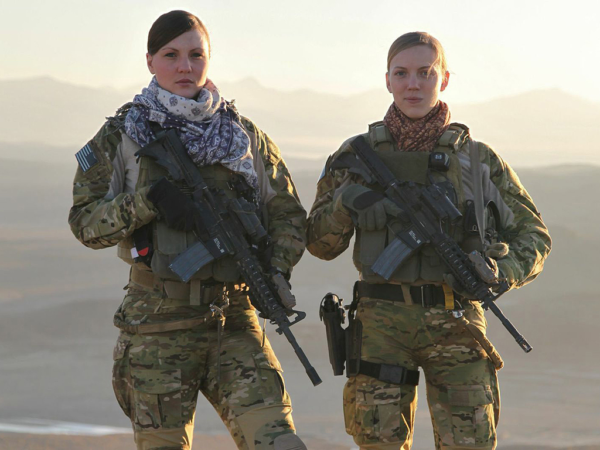 Cleveland (right) with her teammate Staff Sgt. Kat Kaelin while deployed to Afghanistan. I photo courtesy of Caroline Cleveland

While researching schools, she stumbled across the faculty page of Karen “K-Mac” McCulloch, a UNC researcher studying traumatic brain injury in the military. On a whim, Cleveland sent an email to ask if she could assist in an ongoing study. Cleveland spent the next two years working with McCulloch, physical therapist Amy Cecchini, and U.S. Public Health Service Captain Henry McMillan on the project at Fort Bragg. Upon its completion, Cleveland enrolled in UNC’s physical therapy program and continued to work with McCulloch for three more years.

“I have a different perspective today and see why screening and awareness are so important,” says Cleveland, now a physical therapist. “A concussion can be so easily overlooked in the midst of all the other things a service member is prioritizing and thinking about. They generally put their health last because they are taking care of everyone else.”

Most concussions in the military don’t happen in combat, according to McCulloch. “Concussions happen just as a result of training exercises and things that they are normally doing — things that are recreational, car crashes, that kind of thing,” she says. “And they happen more stateside than when they’re deployed.”

McCulloch began developing military specific concussion testing protocols for active duty service members nearly 10 years ago. An expert in traumatic brain injury, she knew the current testing regimen for civilians was far removed from the rigors that military men and women often experience. Simply put, the stakes are high for returning to duty compared to, for example, an athlete who wants to return to play.

“Think about the kind of speed at which people have to react in combat zones,” she says. “If you are not at full capacity, you are potentially jeopardizing your safety and that of the people in your unit.”

Run, roll, aim. These are the components of a combat roll, which is a standard individual movement technique used in nearly every branch of the military. Service members train to run with a weapon and complete fast, agile transitions to the ground, followed by rolls and visual targeting — all the while making smart, measured decisions. It’s a complex mix of cognitive and motor skills.

When McCulloch and a group of occupational and physical therapists began discussing concussions among this population, they took note of these rigorous requirements and observed that current testing methods only focused on singular activities. At the time, doctors tested for balance and cognition separately and then reported symptoms — the same protocol given to anyone with a potential concussion.

“When some of these people get tested, you look at them and they look fine,” McCulloch says. “They can all run. So you couldn’t just use a stopwatch and say, Yeah, that person’s too slow. It’s a lot subtler than that.”

McCulloch and her team incorporated dual- and multi-task scenarios into their testing methods, mimicking the run, roll, aim training. They outfitted each participant with movement sensors to create a data set that reveals the subtle changes evident in someone with a concussion.

Smartphones actually have these sensors built in and are what McCulloch uses to collect and analyze the data — the analyses for which are being developed by UNC biomedical engineer Oleg Favorov. These methods compare the collected information with that of healthy service members of the same age in an effort to determine when a service member’s movement approximates “normal” and when return to duty is appropriate. 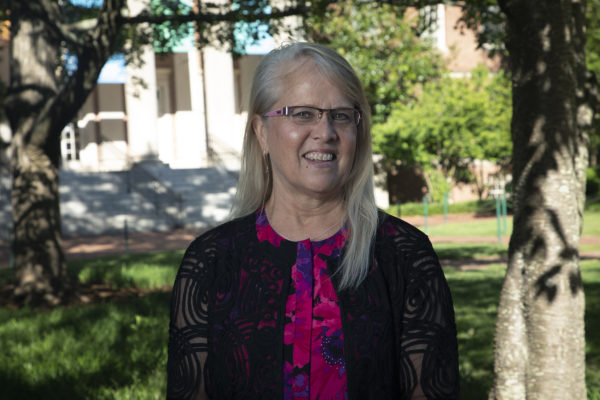 For another task, McCulloch instructs study participants to watch a virtual scene during an exercise step test. After a concussion, people often suffer from vestibular dysfunction, when the eyes fail to stabilize vision during head and body movements. This step task is similar to what it’s like to read on an elliptical, McCulloch explains — it requires a lot of visual stability and can be dizzying for someone who’s had a concussion.

“We want tasks to be challenging, so we push their limits,” McCulloch says. “If they try to do these tasks and realize they can’t do them, they’re sort of like, Oh, wow. I’m not ready to go back. Whereas some of the traditional tasks they have in physical therapy are just standing and walking and not doing anything that dynamic.”

McCulloch quickly discovered that the post-concussion return-to-duty time frame differs for everyone. “Ultimately, it’s a commander’s decision,” she says. “Some physical therapists were using the tasks we developed to assess readiness, but then there would be commanders who would just ask the person if they were ready to go back.”

McCulloch was a key player in helping the Defense and Veterans Brain Injury Center develop a more rigorous concussion protocol for rehabilitation called Progressive Return to Activity (PRA). Released in 2014, it sidelines service members who’ve sustained their first concussion and continue to have symptoms after a few days, as well as those who receive their second concussion within a year. A primary care provider determines whether a physical therapist is needed, and if symptoms continue, the person is referred to a higher level of care including rehabilitation for more comprehensive evaluation and intervention.

Having deployed to Afghanistan during her service, Cleveland can attest to the difficulty of conducting concussion testing in these settings. “K-Mac’s work is particularly vital because it strives to be feasible within a military environment that is often dangerous, chaotic, busy with many competing priorities, and systemically governed by a mindset of selfless service,” she says. That’s why McCulloch strives to limit setup to small spaces and use equipment that is durable, easy to maintain, and user-friendly — like smartphones.

Less than 1 percent of the population serves in the military — but that 1 percent is physically and mentally overtaxed, according to McCulloch.

“There is one guy in one of my study’s healthy control groups who has had 12 deployments — and an estimated 50 concussions,” she says. “But he’s still serving as an active duty Special Forces member. I think a lot of people in our country don’t realize that people are still deploying. So, to me, it’s really important work to meet the needs they have and keep them as safe as they can be.”