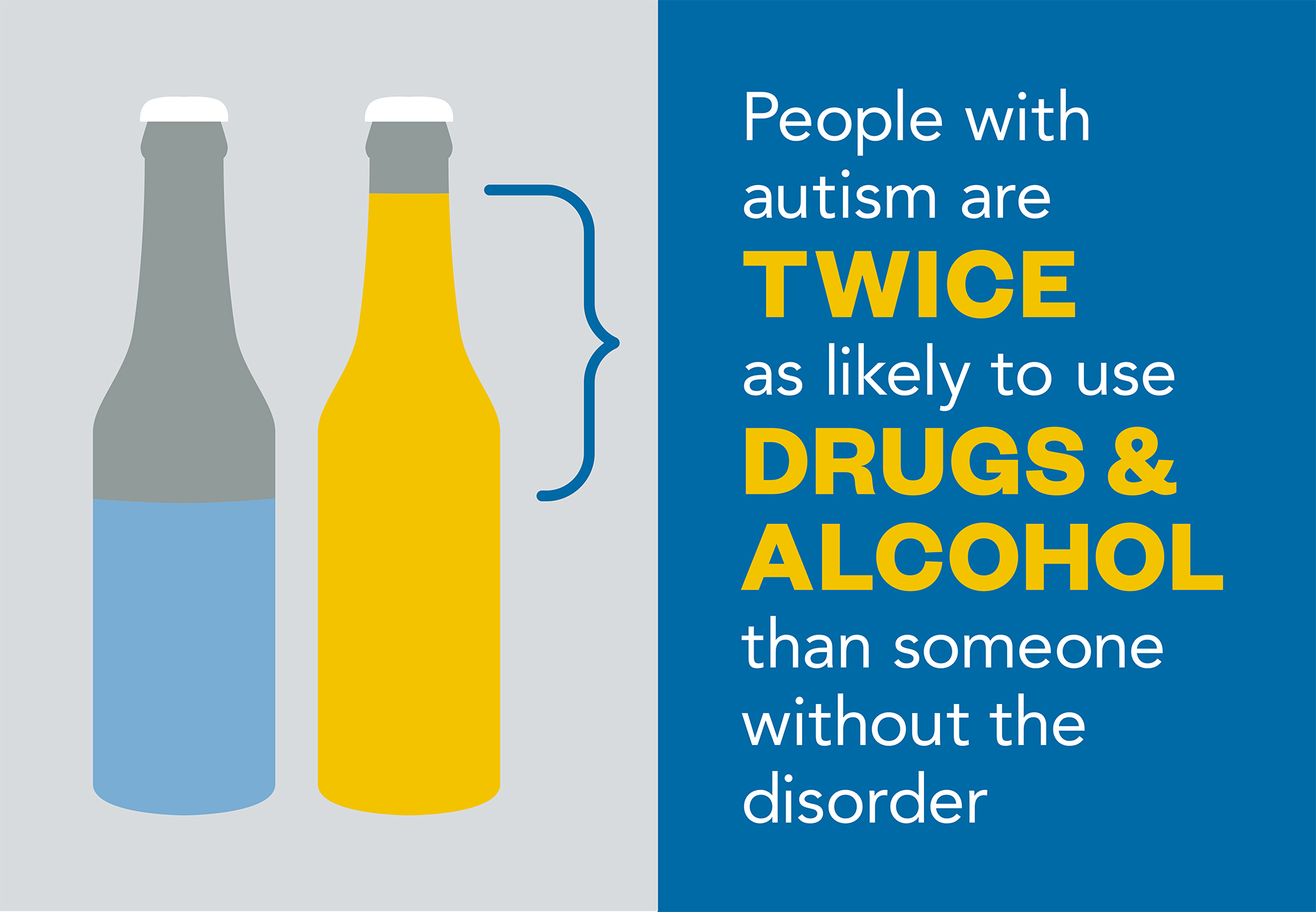 graphic by Corina Cudebec
This statistic comes from a January 2017 paper published in the Journal of Autism and Developmental Disorders.
By Alyssa LaFaro
Health | Society

“Adolescents and adults with autism struggle more in adult life than their neurotypical cohort. People with an ASD want to hold a job, but get laid off. They want to go to college, but cannot adapt to collegiate life. They want relationships, but don’t fit in. The desire to fit in and the inability to do so would lead anyone to look for relief, an escape, or an excuse for appearing different.”

–Elizabeth Kunreuther and Ann Palmer, “Drinking, Drug Use, and Addiction in the Autism Community”

Imagine what it’s like to be on a first date. The nervousness, the desire to make a good impression, the focus it takes to carry on stimulating conversation. Now add autism to that scenario. That person is also trying to block out all the noise in the room, which can seem deafening. At times, they have to pay extra attention to social cues and make sure they respond not only with the right words but the right facial expression.

“I don’t think we realize the amount of work it is for people with autism to socialize,” Elizabeth Kunreuther says. “The amount they have to keep in their head while having a simple conversation that we take for granted is so extensive that it’s exhausting. So you want to have something to relax you in those situations — to help you feel part of the crowd.” And, for many, that something is alcohol or drugs.

“I just discovered a YouTube video of a woman with autism who uses opioids daily,” Kunreuther, a clinical instructor at UNC’s Addiction Detox Unit, adds. “And she is very articulate and goes on to say, I’m on opioids right now, because I can’t function in society otherwise.” 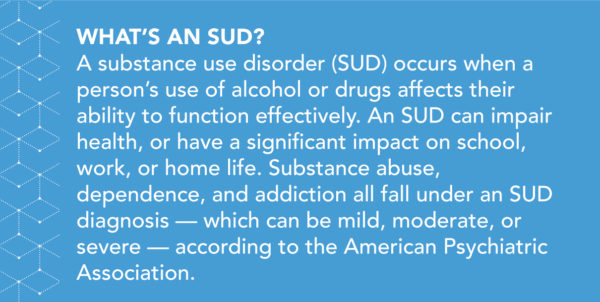 People with autism are twice as likely to use drugs and alcohol than someone without the disorder — a fact that Kunreuther and Ann Palmer, a faculty member at the Carolina Institute for Developmental Disabilities, share in their new book, “Drinking, Drug Use, and Addiction in the Autism Community.”

To write it, they interviewed and surveyed autism and substance abuse specialists, leaders of college programs, and individuals with both autism spectrum disorder (ASD) and substance use disorder (SUD), as well as their family and friends. They also utilized the wealth of knowledge on social sharing sites like Reddit, SoberRecovery, and YouTube — refuges for people with ASD and SUD, according to Palmer and Kunreuther.

The disorders share more similarities than one might think, Kunreuther and Palmer point out. Just like people with ASD need routine to make the world a little less stressful, for example, people with SUD follow their own particular pattern of substance use throughout the day. These populations, it turns out, share more commonalities than that — both engage in repetitive behaviors and can have a genetic predisposition to their disorders.

“When we think about kids with autism, we assume there are all these protective factors around the disorder,” Palmer says from personal experience. Her son has autism. “So they aren’t going to be the kids you have to worry about drinking too much or doing drugs.”

Both authors stress that the book’s purpose is not to push a particular theory or methodology. “We are encouraging understanding, compassion, education, and patience,” reads the introduction. “If there is one takeaway from this book, it is not to make assumptions.”

Few research projects have tackled the topic of substance use among people with autism. Why? “Both diagnoses are highly stigmatized,” Kunreuther says. “How would you find participants?”

While a formal study presents challenges, Kunreuther and Palmer hope their book opens the discussion.

“We want to help parents and professionals understand this risk, and prepare our kids,” Palmer says. “There is obviously an autism community — the parents I know and myself included — who aren’t thinking about substance use risk. For years I was one of the many parents who thought substance use wouldn’t affect my child.”

But statistics suggest otherwise. Many adolescents and adults who develop substance use problems have a co-occurring mental health diagnosis, according to the Substance Abuse and Mental Health Services Administration. Twenty percent of people with an anxiety or mood disorder have an SUD, and 40 percent of high-functioning individuals with an ASD are diagnosed with anxiety and 34 percent with clinical depression.

Kunreuther and Palmer point to these numbers in the book: “It could be argued that a percentage of adults, especially older adults, diagnosed with anxiety or depression may have undiagnosed autism and abused substances as a means to cope. […] But it is important to also consider that even for those who know they have an autism diagnosis and have been mainstreamed, they might misuse alcohol or drugs to help them integrate into a neurotypical world, especially if they are grappling with depression and/or anxiety.”

As one person with autism shared on a forum for substance use: “I have had very poor social skills my entire life due to [ASD] and because I have poor social skills, I developed really bad anxiety. […] Drinking a lot — alcohol — helped me be better in social situations. […] It didn’t help with the social skills, but it made me feel like it did.”

The diagnosis: early or late?

Early diagnosis yields a series of protective factors that lead parents to believe their children are safe from substance use, according to Kunreuther and Palmer. A higher level of parent involvement, for example, leads to less opportunities for the child to be alone or off with friends — as does attending schools focused on helping kids with autism succeed. And since children with an early diagnosis are accustomed to getting a certain level of assistance, perhaps they’ll be more likely to advocate for themselves and seek help when they need it as young adults.

Or maybe they won’t advocate for themselves because they never had to. The book explores how the factors that seem to protect children with autism may also work against them in adulthood — especially since the support they grew accustomed to in primary and secondary school tends to drop off when they go to college. 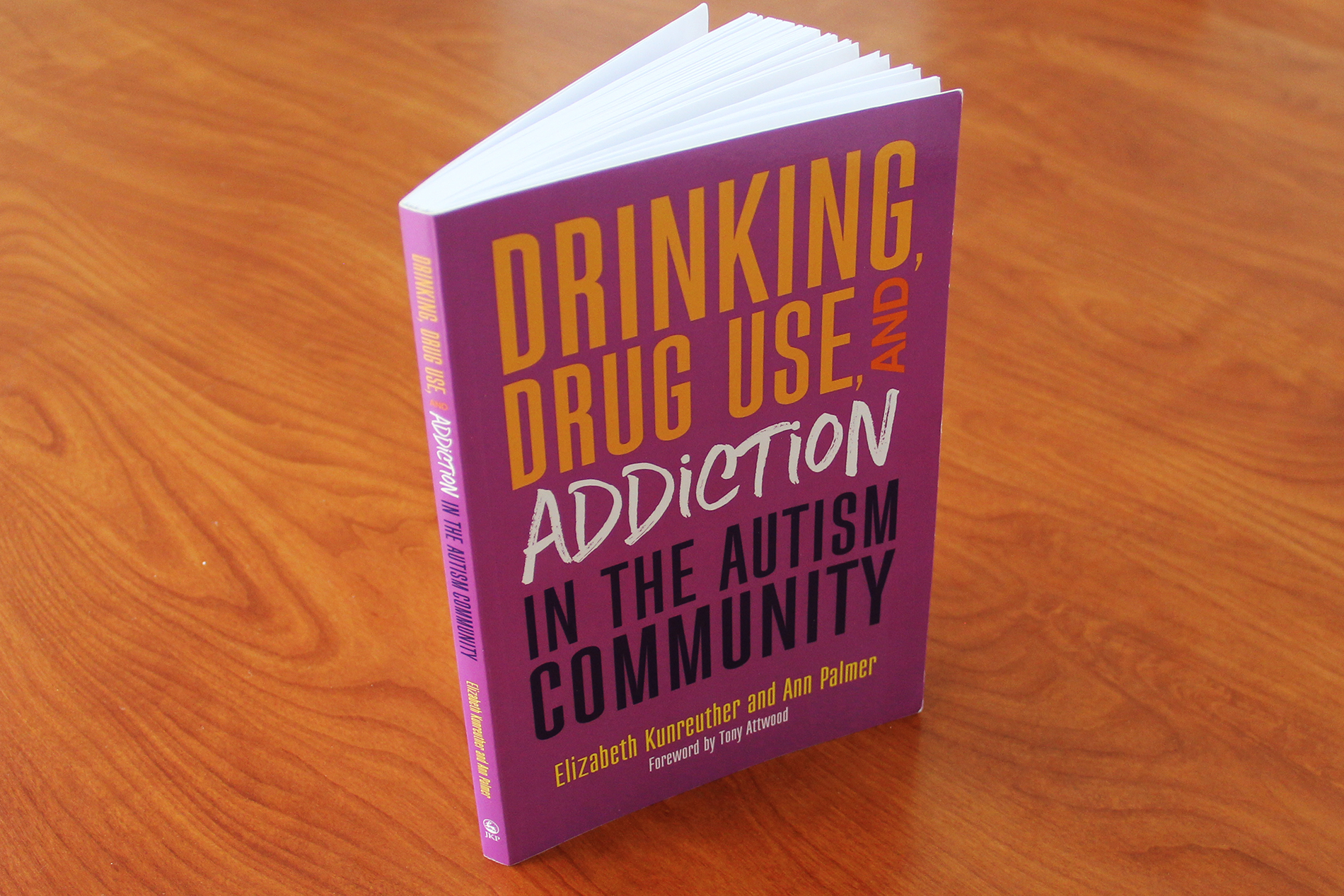 “Drinking, Drug Use, and Addiction in the Autism Community” explores why addiction is more common among individuals with ASD than it is within the general population, and investigates how addiction and autism affect one another.

“There’s such a big picture that needs to be addressed: self-help skills,” Kunreuther says. “When you have a child with autism, you’re only focused on getting the IEP (individualized education plan) right and the teacher and the classroom. But daily skills are probably more important than what classroom they end up in. Self-care. Brushing your hair. Using mouth wash. And knowing how those things will affect an interview or a job.”

Each year in the United States, approximately 50,000 youth with ASD turn 18 years old. Only 40 percent of them will attend college — and even fewer receive a degree. The nearly 54 percent who find jobs receive lower wages than their peers without autism and those with other types of disabilities.

“Because most autism research is focused on children, it’s sort of misleading that if you apply early intervention everything will be resolved by the time they’re adults,” Kunreuther says. “We’re finding there’s this services gap, this understanding gap. And these mainstreamed individuals are being expected to fold into society when they haven’t really had preparation.”

Those diagnosed late in life might struggle with fitting in and feelings of constant failure. “Imagine if you know there’s something different about yourself, but you don’t know what it is and there’s no reason or definition or diagnosis for it that explains why you struggle, why you’re different,” Palmer says. “That can affect your self-esteem and might make you more likely to use substances to feel better about yourself.”

On the other hand, those who receive an autism diagnosis in adulthood may have better coping skills or have grown up with a family that sees them as an individual rather than a person with a diagnosis.

“But whether you’re diagnosed at 3 or 23, I think both groups may turn toward substance use to relieve anxiety and cope,” Palmer says.

One of Kunreuther and Palmer’s main goals in writing this book is education. “We want people to be educated about the risks and to not assume that, because autism is a part of someone’s life, they’re not going to have the same kind of stress and, therefore, the risks of substance use,” Palmer says.

They also hope it leads to future research projects and changes in public policy. “It’s a matter of life and death,” Kunreuther stresses. Until appropriate services, supports, and resources — like vocational rehab, housing, job assistance, and so forth — for all adolescents and adults with an ASD are easily accessible, she believes the risk of substance use among this population will continue to be high.

That’s why they continue to discuss the topic beyond the book, by presenting at conferences, schools, and treatment facilities. “We need to know more,” Palmer says. “We need evidence-based treatments and studies that give us more information so we can make progress and raise awareness about this.”

“What are the motivating factors for people with autism who use substances?” Kunreuther asks. “We need to discover what’s driving this.”

Elizabeth Kunreuther is a clinical instructor in the Department of Psychiatry within the UNC School of Medicine, specifically within the Addiction Detox Unit at WakeBrook in Raleigh.

Ann Palmer is a faculty member at UNC’s Carolina Institute for Developmental Disabilities and the author of four other books for parents, family members, friends, and educators of people with autism.