An unassuming woman with glasses and a swath of gray hair swept into a bun weaves in and out of the bustling Saturday morning crowd at the Carrboro Farmers’ Market. She finally finds what she came for — the perfect watermelon — and makes her way back to her bike, where she carefully straps the melon on the rack and steadies herself for the balancing act that will be required to ensure its safe journey home.

Attending the market is one of Alice Ammerman’s favorite activities. The inaugural Mildred Kaufman Distinguished Professor of Nutrition in the UNC Gillings School of Global Public Health has spent decades pursuing improved nutrition, food equity, and better health for people from a wide range of economic backgrounds. Today, she continues to find ways to improve and change her community for the better. She serves as a consumer-owner director on the board for Weaver Street Market, a local co-op grocery and organic food market, and actively seeks out other ways to stay connected locally.

Though her humility and good-natured attitude are immediately apparent to anyone she meets, what might not be is her legendary status in the fields of nutrition and health. Her careful attention to community welfare comes from a lifetime career dedicated to health and wellness, both from a larger scale public health perspective and from the perspective of customized care for individuals.

Born in Washington, D.C. and raised in Maryland, Ammerman first moved to North Carolina in 1972 to attend Duke University as an undergraduate student. While there, she majored in Comparative Area Studies with a focus on Africa and anthropology, something she felt drawn to because of the interdisciplinary nature.

At the time, though, she found herself thrust into an epicenter of social change. That year’s freshman class was comprised of twice as many black students than ever before enrolled at the college, and for the first time in history, Duke’s East and West campuses were transformed into a co-educational learning space. And, as a member of the varsity women’s basketball team, Ammerman had a front seat to the restructuring of an administration when, in 1974, Duke implemented Title IX policies to combat gender discrimination by reexamining funding for both women’s and men’s varsity sports programs.

Ammerman also took interest in national events like the Nestlé Boycott. As breastfeeding rates rose in the United States, the company began aggressively marketing their infant formula to poor mothers in developing countries — a decision that was hotly protested by advocacy groups. Ammerman quickly became an involved member of the movement.

“I’ve always been a little bit of a radical, an activist,” she shares. “Being a part of the Nestlé boycott, in particular, made me realize that maybe I should learn more about health and nutrition, instead of just knowing about Africa.” So, a few years after graduating in 1976, she decided to pursue a master’s degree in public health and nutrition.

After completing her master’s, Ammerman moved to Atlanta to be near her husband-to-be —UNC physician scientist Tom Keyserling — who was wrapping up his studies at Emory University. There, she got a job with the Women, Infants, and Children (WIC) program through the U.S. Food and Drug Administration. 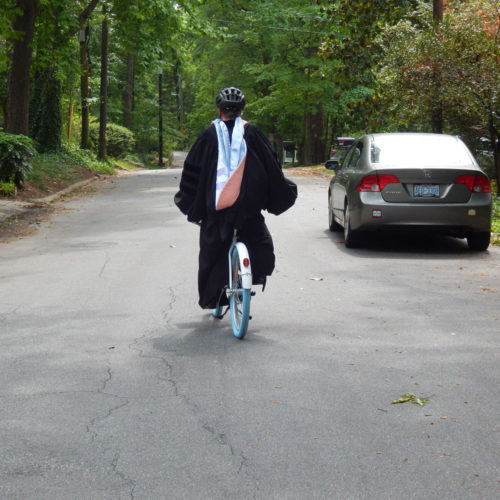 Ammerman is an active cyclist and even rode her bike, in full regalia, to the 2016 UNC doctoral hooding ceremony.

She spent the next nine months working to safeguard the health of local, low-income women, infants, and children at risk of nutritional deficit. While there, she discovered that a key component of good health care is establishing a genuine relationship of trust and comfort with the individuals you work with. Little things — like providing accommodations for children while their mothers seek consultation — go far.

In 1982, Ammerman moved to Rochester, New York, to work as a clinical and pediatric dietitian at Strong Memorial Hospital, where she worked one-on-one with patients and families in a clinical setting. “It was something I thought I would never be doing, and it was a real change for me,” Ammerman says.

At the hospital, Ammerman continued to see the significant disconnect between public health approaches and patient-based clinical care. “We once had a very premature infant born to a very young mother,” she remembers. “We spent a year on treatments and tube feedings, very much focused on the care, and the mother ended up getting pregnant again while we weren’t paying attention. That really struck me: You can get focused on the immediate clinical issues and not think more broadly about the larger context.”

The next big move came several years later, when Ammerman’s husband was assigned to two years of medical service in order to fulfill the terms of his National Health Service Corps funding. The couple moved to Warrenton, North Carolina, a tiny town situated just below the Virginia border.

“It’s an old town, and we lived on a street with many elderly widows,” Ammerman says. “We got to know the neighbors well. They would say, ‘We want you to stay until the bushes are this high,’ holding their hand well above the current bush height.” The town was so small, she adds, that the mailman would drop off letters addressed to the office at their house because he knew where they lived.

During this time, Ammerman began pursuing her doctorate at UNC — a 144-mile roundtrip commute, once or twice per week. “It was a really good experience, but it became hard to stay,” she says. “The commute was long, and we both wanted to further our careers and raise a family. When my husband got a fellowship that allowed us to move back to Chapel Hill, it was time to go.”

Despite leaving Warrenton, Ammerman has continued to work with the community there. She has included Warren County in grants concerning food systems research, and strives to improve nutrition in similar towns. Although she never got to see the bushes grow in person, she remains an extended member of the community.

As a doctoral candidate at UNC, Ammerman developed a pen-and-paper column system to simplify health assessment. “You can just look down and see where someone is doing well and where they might need some guidance or help,” she says. “It’s scored easily, without computers or calculators — you don’t even need nutrition knowledge to understand it. It’s designed to be accessible.”

Since achieving her doctorate in 1990, she’s adapted the tool to fit the dynamic landscape of modern healthcare. Today, it is web-based and used extensively by counselors, health educators, and advisers.

Ammerman used assessment tools like the one she created to “translate” the Mediterranean diet into an accessible health regimen. She, Keyserling, and their research team have spent the last 20 years refining what they’ve termed the “Med-South Diet,” which emphasizes high-quality dietary fats like those found in vegetable oils, nuts, and fatty fish like salmon. They have successfully integrated the diet into Southern communities through interventions like Heart Healthy Lenoir, which develops new methods for reducing heart disease in Lenoir County.

In 1991, Ammerman joined the UNC Nutrition faculty and soon found a home at the UNC Center for Health Promotion and Disease Prevention. Continuing to tackle intervention-based research regarding nutrition and health in communities, she rose quickly through the ranks. In 2004, the center gave her the directorship.

Looking ahead, Ammerman is excited about the potential intersection of data science and healthcare. “Now that we have much more robust electronic health records, we can incorporate food insecurity as part of a hospital admission, which can help with recommending solutions for patients after they leave,” she says. 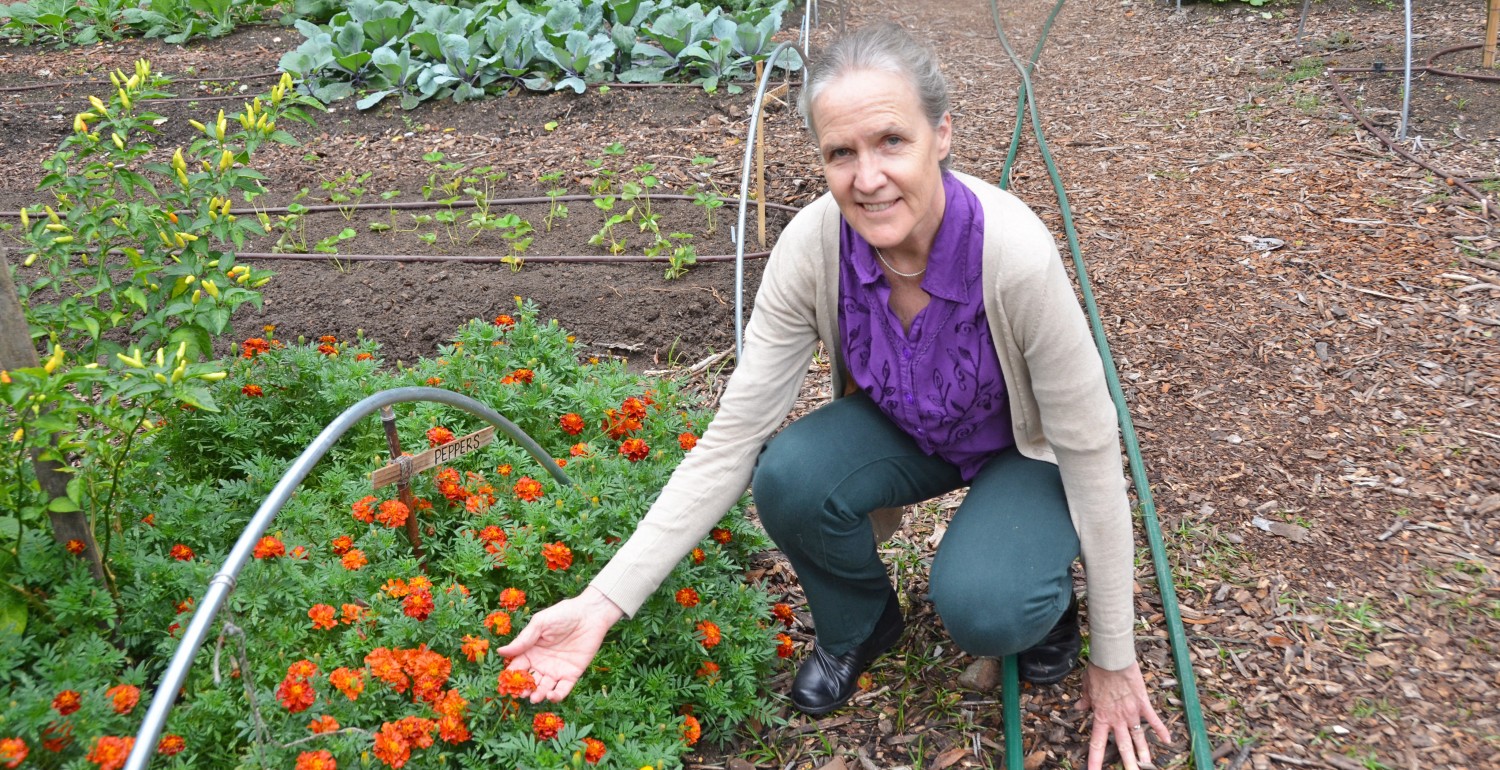 For the last three years, Ammerman has co-chaired the UNC “Food For All” theme committee, which has generated a myriad of projects including research on the genetics of seafood, transforming planters on top of Rosemary Street parking deck into gardens to help low-income youth, and supporting the Edible Campus Initiative’s 13,000-square-foot garden behind Davis Library.

For example, if a cardiologist ignores the fact that their patient can’t get access to healthy foods — “that’s incomplete care,” Ammerman points out. “With the power of the electronic health record, we can link people with resources like food banks, food pantries, and community gardens.”

Food availability has become a particular focus for Ammerman in recent years, best exemplified by her Good Bowls initiative — a project that aims to provide locally-sourced, nutritious meals to communities in need. The Good Bowls business model focuses on reducing food waste, increasing accessibility, and bringing benefits to the farmers whose crops serve as ingredients in the meals. By pricing Good Bowls higher in more affluent retail outlets like Weaver Street Market, Ammerman hopes to sell the product for a food-stamp-accessible price at lower-income centers in food deserts like convenience stores and corner shops. The product launched in June, with tasting events and placement across the Triangle

Ammerman has a demonstrated knack for bridging gaps. Whether it’s between healthcare providers and recipients, farmers and customers, or public health officials and clinicians, she always manages to find a way to connect groups in pursuit of mutual understanding. Her personal approach has proved time and time again to be the key to her success, and will no doubt be a continued theme in her years to come.

“People often assume researchers are just coming to tell them what to do, rather than work with them,” Ammerman observes. “But public health doesn’t work that way. People need a chance to provide input. It’s really important to start with the community, to ask for their perspective, and to see what their priorities are. In the long run, working that way makes for a much better and more productive partnership.”

Alice Ammerman is director of the UNC Center for Health Promotion and Disease Prevention and the inaugural UNC Mildred Kaufman professor of nutrition.