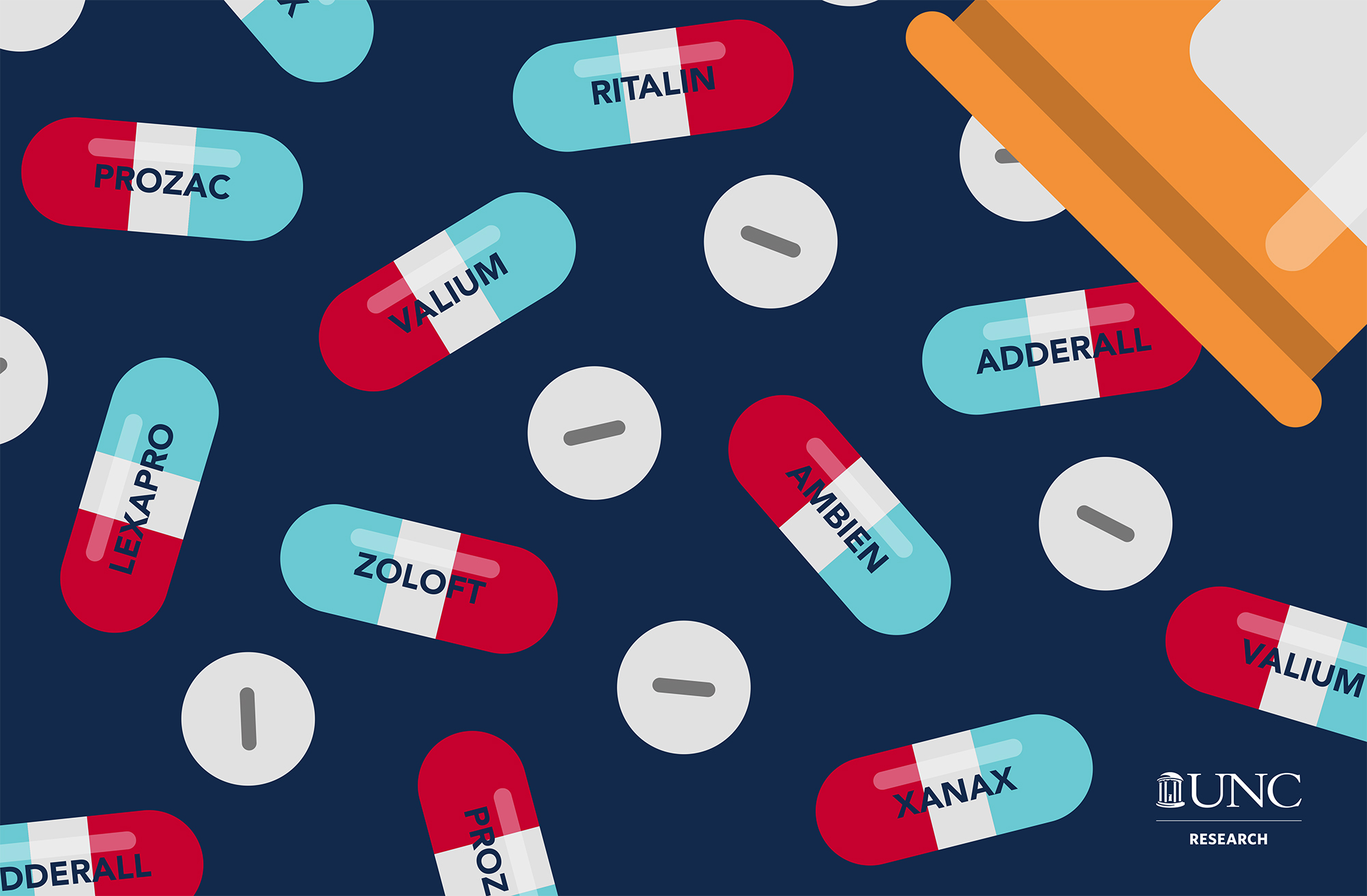 In the United States, nearly 50 percent of adults will develop a mental illness during their lifetime, according to the Centers for Disease Control. And the majority of those people are civilians. Think about the added stressors that the 1.3 million active-duty military personnel in the United States face — the rigorous training, uncertainty surrounding deployment, back-to-back tours, and separation from family.

At least one in six American service members takes some form of psychiatric drug, reports a 2013 article from Military Times. A 2017 project analyzing mental health treatments for 1,300 military personnel deployed to Iraq revealed that approximately 500 were diagnosed with a mental health disorder, 74 percent of whom were given antidepressants.

Military psychiatrists first became interested in antipsychotics during the Vietnam War, but their use of these drugs was quickly criticized for fear of impairing a soldier’s emotional judgment and the unknown long-term health effects — a sentiment that remained unchanged for decades.

But then came the 1990s, which yielded the creation of selective serotonin uptake inhibitors, or SSRIs — a “cleaner” psychiatric drug. Even then, the Army remained conservative surrounding the use of any medication to treat mental health. The 1998 field manual on combat stress control states: “The recommendation for most cases is to use no medication unless it is truly necessarily for management.”

In just eight years’ time, this message would shift. The 2006 field manual states that psychiatric medications are “essential to improving a soldier’s change to [return to duty] whether in theater or after evacuation.”

That’s what UNC medical anthropologist Jocelyn Chua hopes to find out. She’s spent the last year interviewing U.S. Army veterans who have taken or seen the effects of medications that affect mental  and behavioral health in a war zone. Such treatments, called psychopharmaceuticals, include everything from antidepressants to stimulants to sleep aids.

One of the few studies on this topic, according to Chua, suggests that sleep aids are the most prescribed psychopharmaceuticals in Iraq warzones, followed by antidepressants. “Some soldiers report that even antimalarials have had psychoactive effects including nightmares and jitters,” she explains. “There’s actually very little known about use of these medications downrange.”

Downrange, or “in theater,” are terms used by the military to refer to overseas deployment. Chua is particularly focused on U.S. Army deployments in the post-9/11 wars. Since the 2003 U.S.-led invasion of Iraq, recruitment numbers have occasionally dwindled, causing tours to stretch from 12 months to 15 and a decrease in time between deployments. 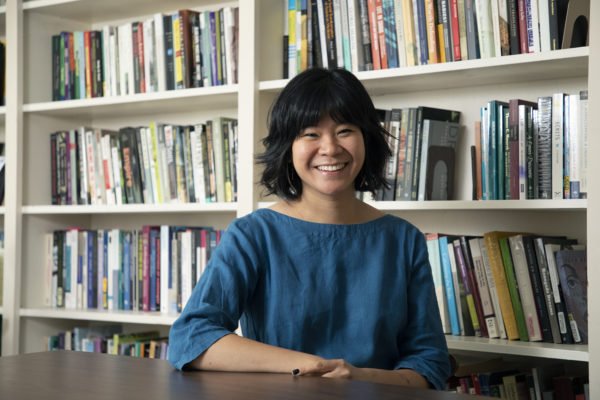 Before she began her research project with the military population, Chua spent three years in Kerala, South India, learning about the high rate of suicide that occurs there. The outcome of this work is a book called, “In Pursuit of the Good Life: Aspiration and Suicide in Globalizing South India.” I photo by Alyssa LaFaro

By the time she’s done with her current project, Chua will have spoken with nearly 200 people to verify this data. So far, she’s interviewed 35 Army veterans and health care providers to learn how psychopharmaceuticals are circulating in war zones — how they’re prescribed, accessed, used, shared, and experimented with — and the effects soldiers report. She calls this phenomenon “the pharmaceutical creep.”

“It’s the slow drift of psychopharmaceuticals from an overmedicated civilian world into theater and into the military corporate body in the post-9/11 era,” she writes in a recent paper. “A seepage that simultaneously unsettles and reinforces the boundaries that would distinguish home front from war zone, military from civilian.”

By the mid-2000s, the U.S. Army was having trouble meeting its recruitment targets, partly because of bad press, Chua explains. A slew of congressional hearings exposed concerns around mental and behavioral health — including post-traumatic stress disorder (PTSD) and traumatic brain injury (TBI) — among returning soldiers.

“It was also the nature of the conflicts themselves,” Chua explains. “For the first time, you have historically unprecedented long back-to-back deployments, in part, because nobody expected these conflicts to last as long as they did. And you’re fighting wars on at least two fronts, which puts incredible pressure on people to deploy back-to-back.”

In 2005, more than half of the combat brigades deployed to Iraq encompassed soldiers from the U.S. National Guard and Army Reserve — comprised of part-time military personnel who serve one weekend a month. “That’s a very different demographic than those who are active duty,” Chua says.

“They maintain non-soldiering occupations and don’t live on base, but they can be activated and deployed,” she explains. “The idea of pharmaceutical creep marks this anxiety that this institution is permeable, that the civilian influences usually kept bay are coming into the military, and now the military has to figure out what to do with that.”

A problem from within

When mental and behavioral health care providers evaluate soldiers for medical processing, they must reconcile their current medications. People taking Adderall for ADHD, for example, often receive medical waivers so they can continue taking the stimulant during deployment — a common occurrence, according to Chua. If soldiers taking psychopharmaceuticals could prove their stability on their dosage for 90 days, then a waiver would be considered for them as well.

To sidestep protocol, military personnel will bring medications from the private sector into a war zone without proper consent, or will have family and friends mail it to them in care packages. While deployed in the Middle East, one service member who was struggling to sleep raided a pharmacy on an Iraqi military base that had been taken over by U.S. forces early in the war. On the recommendation of his mother, a nurse, he searched for a sleep aid. The only thing he could find was Thorazine, an antipsychotic medication.

“He took the medication in order to subvert going to mental and behavioral health so no one would know he was taking it,” Chua says. Concerned about side effects, he and his teammate would tag-team the drug: One would stay awake to watch the other, making sure they didn’t oversleep or suffer from some other problem. They would switch on and off each night, according to Chua.

Chua also talked with a substance-use counselor from the National Guard who pointed out that, oftentimes, these medications are being prescribed by the Army’s primary care physicians, rather than an external psychiatrist or psychologist. But even when these medications go through official channels, they can still cause problems.

Sgt. Matthew Anderson (name changed for confidentiality) was part of a small Special Forces team tasked with completing sensitive tactical operations in Iraq and Afghanistan. In his interview, he told Chua about the concerns he had for his two teammates taking prescription drugs to treat depression. While he acknowledged the effectiveness of anti-depressants, he felt that, in the combat zone, they compromised the safety of the entire team.

“[My teammates] didn’t have their edge anymore,” he told Chua. “There’s a certain feeling and a sense when you know that things are going to go bad: I could feel IEDs, I could feel firefights before they ever came around. Certain smells. It’s a whole world that changes. And they would lose that.” He went so far as to say the SSRI prescriptions turned his teammates into “zombies” during situations requiring quick, measured decisions and actions.

“The problem of psychopharmaceutical creep,” writes Chua, “not only originates from the outside, it also emanates within.”

More work to be done

For the next two years, Chua plans to interview approximately 150 more people, from enlisted soldiers to mental and behavioral health care providers to journalists and military defense lawyers. With the latter, she hopes to learn about the role these medications play in cases of unauthorized military violence.

“If you have a soldier who is on medications prescribed by the military, and they commit an unlawful act and claim that it was because of these medications, how do you then suss out soldier liability?”

Chua is also using this project to engage student veterans in social science research. So far, she’s already hired five research assistants with military experience and is currently working with Veronica O’Kelly-Nickerson, a U.S. Army veteran who graduated from Carolina in December 2018; senior Sarah Weinstein, a midshipman in the UNC Navy ROTC program; and Charles Howe, a May 2019 graduate and veteran of the Army National Guard. By the third year of this work, Chua will organize a national symposium on collaborative social science research between civilian faculty and veterans.

In the meantime, Chua strives to learn more about psychopharmaceutical use during times of war to better understand not only military lifestyle but the broader culture in which we live.

“Psychiatric medication use is not simply going to go away in the context of U.S. military,” Chua says. “It will have, I think, really significant impacts on how Americans understand military suffering, the nature of American conflicts, and the ethics of soldiering. It doesn’t only have clinical and medical implications — it has implications for how we as an American pubic understand war.”

Jocelyn Chua is an associate professor in the Department of Anthropology within the UNC College of Arts & Sciences. This research was made possible by funding from the National Science Foundation and the Wenner-Gren Foundation. Special thanks to the Carolina Digital Repository (CDR) for making the research articles linked within this piece accessible to the public. Within University Libraries, the CDR provides long-term access and safekeeping for scholarly works, datasets, research materials, records, and audiovisual materials produced by the UNC community. To learn more about their work, visit cdr.lib.unc.edu.