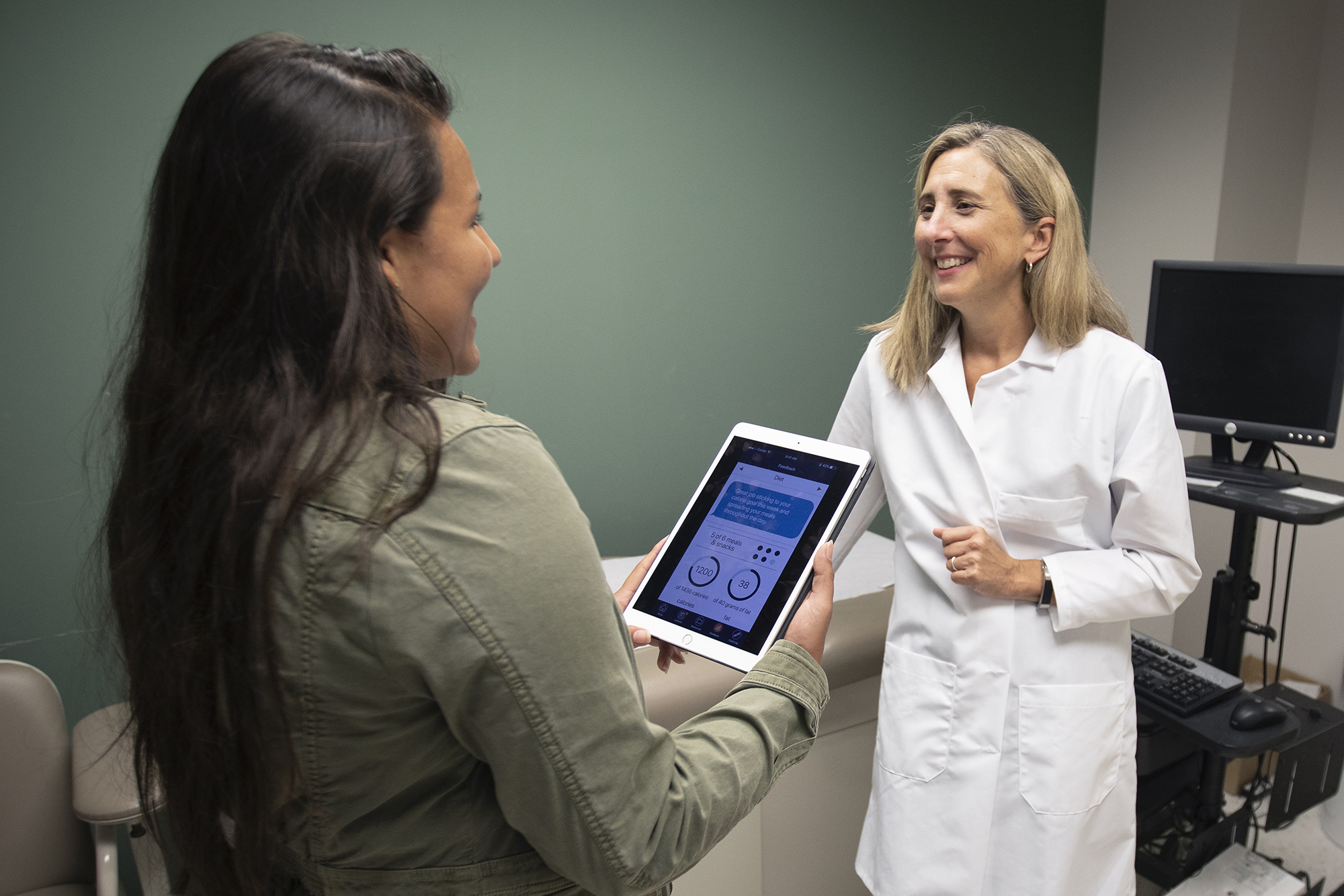 Acknowledging the multiple health risks they face after receiving obesity diagnoses, two friends decide they’re going to work together to get healthier. They develop an exercise regimen and change their diets. They send each other encouraging messages and tag-team meal prep. They get more sleep and adjust to their new lifestyle. After a few weeks, the results begin to show on the scale. They’ve both lost five pounds.

Then another month goes by. This time at weigh in, one person has lost 10 pounds. But the other remains stuck at five — and frustrated. This is a familiar story: People on the same exact diet, completing the same workouts, experiencing different results. What gives?

“It is not a simple matter of energy balance,” says Penny Gordon-Larsen, in reference to calorie intake and output. “And the world has approached obesity from the energy balance equation — not the recognition of how complex obesity is and the fact that there’s no one path to obesity.” 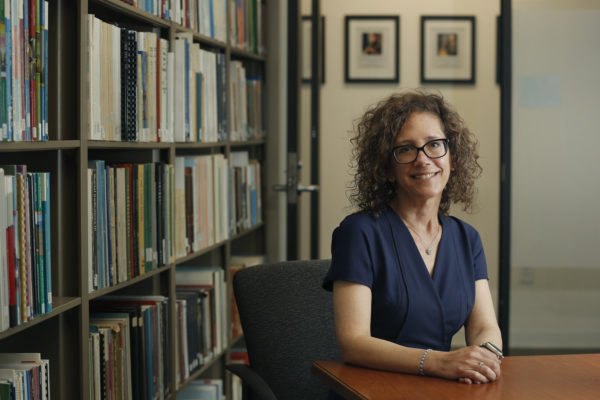 Penny Gordon-Larsen is the principal investigator for the Obesity Hub project. (photo by Megan May)

Gordon-Larsen, a UNC obesity researcher, believes there’s a lot more at play when it comes to weight gain and loss. Beyond eating and exercise, environmental factors, behaviors, and genetics all play a role. Every person is unique and requires a different approach to lose weight. That’s because there is not just one “obesity” but many different types — something called heterogeneity.

This makes obesity tricky, an unfortunate thing since it’s a nationwide health crisis — 93.3 million U.S. adults are obese, according to the Centers for Disease Control. That’s nearly one-third of the population. And why Gordon-Larsen is driven to tackle this problem.

Thanks to a new funding program at UNC called Creativity Hubs, she’s organized a team of more than 30 researchers across 20 academic departments, from nutrition to health behavior and even data science. And that’s the exact purpose of the funding. The program supports “hubs,” or teams of diverse scientists spanning multiple disciplines who come together to solve major societal challenges.

“I am so grateful to the vice chancellor for research, Terry Magnuson, who had the idea to make a large grant that encourages innovation and team science,” Gordon-Larsen says. “These are hard topics to find pilot funds for. We would never have been able to approach this problem using such an innovative approach without this mechanism.”

This support enables Gordon-Larsen and her team to move broadly and quickly. Within the team’s Creativity Hub — called the “Heterogeneity in Obesity Creativity Hub: Transdisciplinary Approaches for Precision Research and Treatment” — they conduct genetic, biologic, and environmental research in humans and mice, and are also developing a personalized health tracker and data analysis and visualization app.

“Working across so many diverse disciplines involves many conversations,” Gordon-Larsen points out. “Each scientist has to learn about areas of science that they know nothing about. So the clinical researchers are learning about the mice projects, the population researchers are learning about the computer science projects and vice versa. But that time is well spent — it increases the quality of everyone’s work and facilitates the acceleration of discovery.”

Put two people on the same diet and they’ll experience different results — at least, that’s what the data says. The problem with looking at humans only, according to Gordon-Larsen, is that you can’t put them in a lab setting and completely control what they eat for long periods of time. While that kind of study can’t be completed with large samples of humans, it can be with mice.

One of UNC’s biggest strengths is its Collaborative Cross program, “an eight-way cross of different strains of mice that reflects the type of genetic heterogeneity that’s inherent in the human population,” Stephen Hursting, a UNC nutritionist and biochemist, says.

As part of the Obesity Hub, Hursting uses these mice and diversity outbred mice, another genetically diverse group of mice, to understand how one diet impacts multiple subjects. Most recently, he spent 12 weeks observing weight gain in mice fed a high-calorie diet, and then proceeded to see how these numbers changed over eight weeks of a lower-calorie regimen.

“Some mice gained a lot of weight on the diet-induced obesity regimen, and then when we switched to the weight loss, some of the mice who gained a lot maintained their weight while others lost it,” Hursting says. “We even had a few that gained weight on the low-calorie diet.”

Through these observations, Hursting searches for new genetic explanations for these differences in weight gain and loss. He’s also exploring how changes in the microbiome — the community of microorganisms like bacteria and fungi that live in every human being — affect these responses. With collaborators in the population studies part of the hub, they will compare the microbiome associated with weight gain in the mice to that in humans.

With just a couple hundred mice, Hursting and his lab can pick out the genetic underpinnings behind this problem. “We’re hoping to bring new information to the human side, while also using data from our hub’s human studies to validate what we’re doing in the mice,” he says. “I am a big fan of this animal-to-human connectivity. It accelerates our pace and fits nicely with what my lab is always trying to do — connect human studies with mechanistic research.”

MyFitnessPal. Runkeeper. Fitbit. What if there was an app with the combined functionality of these popular health monitoring programs, but it also connected to a smart scale and ultimately provided a weight-loss prescription? Cue health behavior professor Deborah Tate.

“Our app is talking to a lot of devices,” she says. Called mPWR— Mobile Personalized Weight Research — it syncs to a patient’s smart scale, exercise tracking device, diet app, and eventually a glucose monitor.

Right now, Tate and her team are developing the app in a way that will allow people to follow different diets, meal frequency recommendations, and exercise approaches. The long-term goal is to predict who will do best with a specific combination of approaches.

mPWR not only tracks weight, diet, exercise, and glucose levels — it also includes encouraging messages when participants stick to their goals.

“When you combine all those factors together, you could have a dietary approach A with meal patterning B and exercise approach A,” she explains. “That might work well for you, but for me it’s diet B with meal pattern A and exercise A.” The genetic, microbial, and behavioral factors that predict which diet works best for which person are then compared to the findings from the mice and human population data that are also part of the hub.

Tate began researching digital weight loss intervention in the early 2000s. Now that most people use mobile phones access to the internet, it makes sense to provide this information to the patient through that platform, she says. “There’s a segment of the population called smartphone dependent, which means they don’t have internet anywhere but on their smartphone. We want mobile devices to empower patients, so they have the most potentially effective approach at their fingertips.”

As Tate and collaborators wrap up the app-development process, they hope to recruit patients for a trial this fall. For three months, they will track the app users’ progress. The first few weeks will involve figuring out which patterns work best for each individual, followed by a comprehensive prescription that the patient will stick to for the remainder of the experiment. They will also collect biological data for genetics, metabolomics, and microbiome analyses in concert with the hub’s mouse and human studies.

For the trial, Tate hopes to attract about 40 people across cultures, ages, and glucose levels. “We are trying to keep the criteria as broad as possible to get a mixture of genetics,” she says.

Sifting through the data

A project like the Obesity Hub involves thousands of pieces of data. And that data requires storage, organization, and accessibility. Thankfully, Carolina already has a solution for such things — RENCI, UNC’s signature computing institute that oversees data science cyberinfrastructure for researchers.

To make sense of all the hub’s data, RENCI’s Chris Bizon plugs it into a program called ROBOKOP. “In a project this big, you have all these little bits of knowledge, but they’re all dispersed in a bunch of physical locations,” he explains. “What ROBOKOP does is know how to talk to those different knowledge sources, bring them into one place, and smush them all together.”

The software creates what’s called a knowledge graph, a roadmap that shows how all these different pieces of data connect and allows users to ask specific questions. What genes are involved in this disease? What drugs treat those genes? What side effects do those drugs have? ROBOKOP hooks this chain of questions together, providing researchers with insight on what variants lead to obesity.

“It allows us to integrate multiple observations together into a coherent story,” Bizon says. But this process isn’t as simple as it could be, he adds. Researchers must know what they’re looking for and “poke around.” That’s why he’s developing algorithms that do the searching for you.

“You’ve taken all the data and combined it — how can you let the computer tell you what’s interesting?” he asks. “That’s where the fun begins.”

Combine all the evidence from the mice, the human population studies, and the clinical study — and these researchers should make strides toward recommending individual prescriptions for people to manage their weight. If successful, Gordon-Larsen believes this team science tactic has promise for treating diseases other than obesity.

“Obesity is one example of this approach,” she says. “We could do this to tackle other complex diseases.”

Gordon-Larsen would also love to see early career researchers learn to collaborate in this way as they go through their training. While this type of project is hard to complete, she explains, it is fun and effective.

“This could be a model for other kinds of collaborators to do this same kind of work with their own questions,” she says. “It would be great to see more people trained in translational, team science lead this kind of work.”

For the Obesity Hub, the ultimate goal is to combine Tate’s app with Bizon’s app and deploy them in clinical settings in the next 10 years or so. The team strives to treat obesity with both breadth and precision — not only determining a patient’s specific susceptibility to obesity and specific treatments, but developing tools that help them with weight loss.

“While the world has been fighting to reduce obesity, it continues to remain a problem in all corners of the globe,” Gordon-Larsen says. “We hope that the Obesity Hub can help change this, allowing us to further our science in a way that we’ve never been able to do before.”