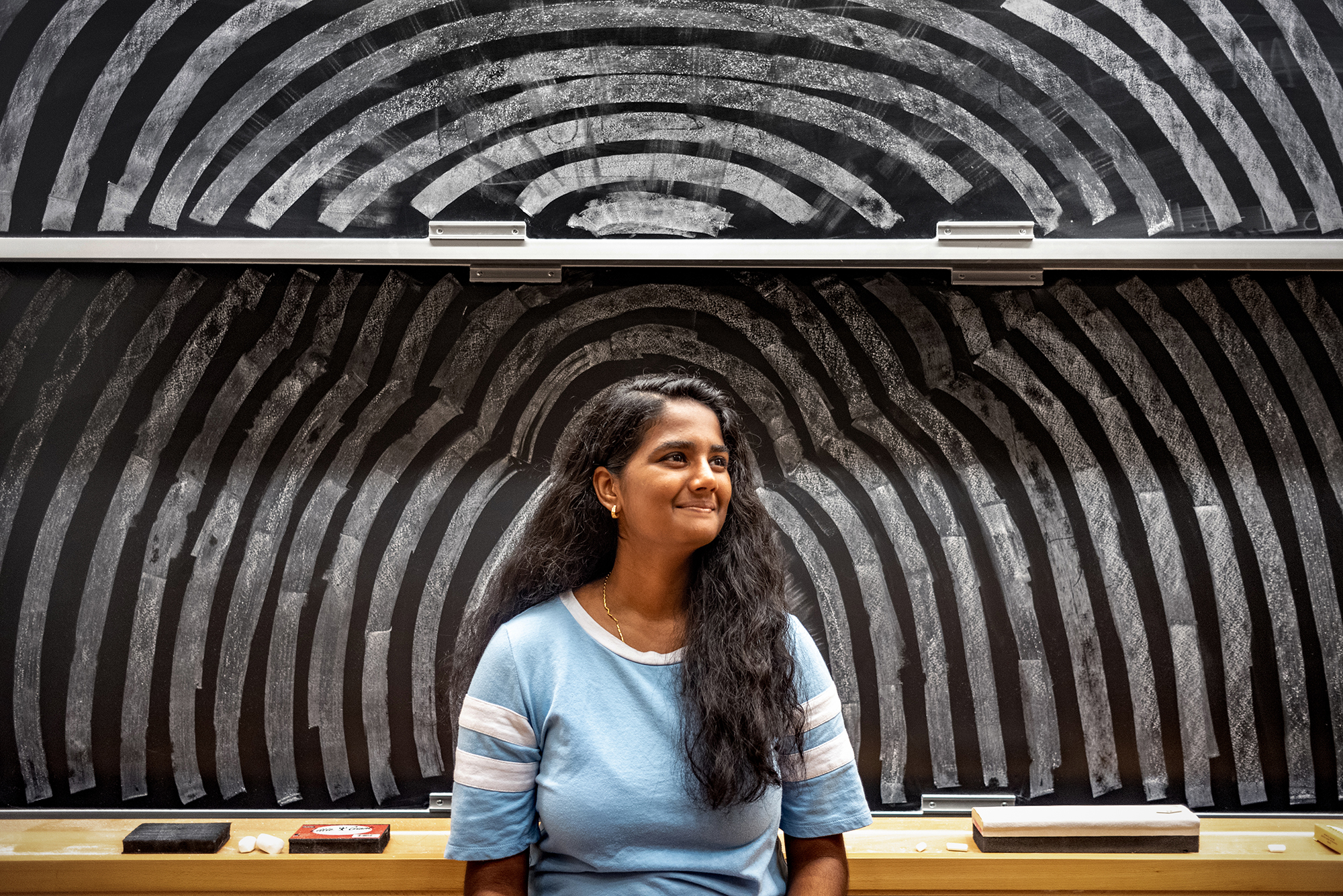 photo by Matthew Westmoreland
UNC sophomore Vaishnavi Siripurapu has tried on many hats in the research world, from working in a sea turtle lab to developing a web comic to teach teens about relationships and sex.
By Alyssa LaFaro
Health | Society

When Vaishnavi Siripurapu was a baby, her father decided to pursue higher education to support the family and had to relocate. She and her mother moved in with her grandmother and great-grandmother in a remote South Indian village. She spent the next four years of her life there, observing how many of the single women who lived there were treated like pariahs.

Siripurapu often thinks about that time and, even then, at such a young age, she understood the disconnect between society’s actions and a culture’s belief system. “In Hinduism, we read all these scriptures about strong women or female goddesses and all their triumphs, but it was really hard for me to find that in society,” she says.

Siripurapu’s parents came to the United States when she was 5 years old. As she got older, the rules of her two worlds remained at odds with one another. She was encouraged to learn how to cook, clean, and maintain her grades as a reminder that her parents gave up everything that was familiar to them in hopes of a better life in America — a message she knew her American friends didn’t receive at home.

But one thing Siripurapu found consistent in both cultures was the objectification of women.

“Indian films, in general, are really sexist,” she says. “I remember watching a movie where this girl in high school married her first cousin. And I kept thinking, This isn’t normal. This isn’t how it should be.”

American television presented its own challenges. When she was 7 years old, Siripurapu remembers watching a Carl’s Jr. commercial that featured a woman eating a burger. “It felt sexual,” she says. “I was just like, she can’t like that burger that much. I didn’t think kids should be seeing that on TV. At that point, I already had a really deep passion for women’s rights and feminism.”

By the time she was 14, Siripurapu knew she wanted to be a gynecologist. For a school project, she started a podcast to teach others about reproductive health.

“I want to make tangible, factual change in communities that otherwise wouldn’t really follow this line of work,” she says. “I hope that helping people understand the reproductive system will also help them stop ostracizing women.”

Now a sophomore at UNC, Siripurapu is pursuing research in reproductive health, but not without getting her feet wet in a few other disciplines first.

Kidney dialysis tubes and tapioca balls lie scattered across a black tabletop as Siripurapu lets out a frustrated sigh. She grabs another translucent sphere and cuts it into quarters, shoving each dissected piece into one of the cylinders. Then, she fills it with water, hoping the tapioca will expand to, ultimately, mimic the spine of zebrafish — a skeletal rod lined with fluid-filled membranes. 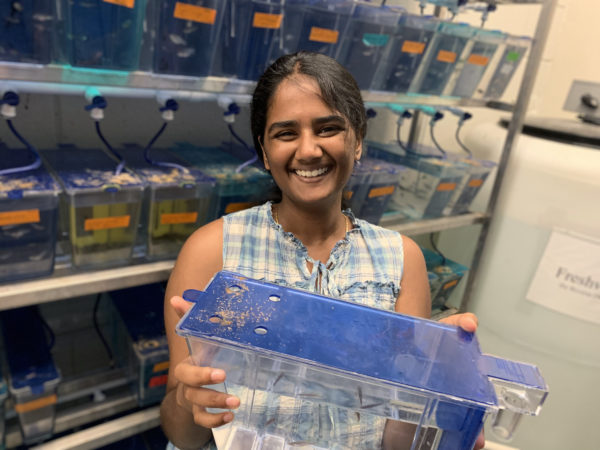 Siripurapu holds a container of zebrafish in the Bagnat Lab.

“Sometimes, I’d feel like I wasn’t cut out for that work,” admits the UNC sophomore. “It wasn’t my area of expertise.”

Siripurapu began doing research in Michel Bagnat’s cell biology lab at Duke University in 2017, just before the start of her senior year at the North Carolina School of Science and Math. She met the biologist through a science communications seminar, where she was given the opportunity to produce an article on a researcher at the university. Siripurapu interviewed Bagnat.

“Everybody in the lab was so nice,” she recalls. “Toward the end of the interview, he told me I seemed to know a lot more about the lab than some undergrads and asked if I wanted to come do research with them. I was shocked because I didn’t think that happened, generally.”

By that summer, Siripurapu was a full-time research assistant in Bagnat’s lab. Her main project, recreating a zebrafish spine, was a tricky one. After exchanging her tapioca balls for Orbeez — a type of bath bead that expands with the addition of water — her model eventually worked. The Bagnat Lab continues to use it today.

“I learned that even if it’s not your area of expertise, you can still do it,” says Siripurapu. “Research teaches you that you can do anything.”

In November 2018, the Bagnat Lab released a paper on this work, citing Siripurapu as one of its authors — making her a published researcher on the cusp of her 18th birthday.

From zebrafish at Duke to sea turtles in the Lohman Lab at UNC, Siripurapu has already tried out a variety of research experiences.

“You don’t have to limit yourself to one thing,” she says. “I know a lot of people who are like, Oh, I got into a yeast lab my first semester at UNC, so I’m just going to work with yeast the rest of my time there. But just because you’re a STEM major doesn’t mean you can’t do history or feminism or public policy. And just because you work in a yeast lab doesn’t mean you can’t make YouTube videos about video games or something else you’re interested in.”

This past summer, Siripurapu refocused her efforts on two projects in reproductive health.

As part of the Innovation Next incubator, she and a team of researchers from across the country assessed what types of reproductive health products would be most successful for girls aged 12 to 17 throughout the South. In an initial interview screening of 21 North Carolina teenagers, they found that while most adolescents know what sex and sex education is, they don’t know much about relationships or how to navigate them.

“We got a really important piece of info from those initial interviews: We should focus on relationship education on top of biological sex education to give people the power they need to actually implement the sex education into their lives,” Siripurapu says.

The best way to teach these skills, according to the researchers, is to put people in first-person scenarios that encourage them to practice. To do this, they developed a concept for an interactive web comic. They spent this past summer crafting a storyline and prototype called “Layla’s Last Week,” which will ultimately be available online via Novelly, a nonprofit that uses educational technology to spark change through stories.

This fall, Siripurapu is working on a project with Lisa Rahangdale, Shivani Sud, and Gaorav Gupta, who are faculty within UNC’s departments of obstetrics and gynecology and radiation oncology. She will be assisting with the development of a new HPV blood test. Current testing can only be done with a Pap smear or biopsy.

“The team is very kind and invested in the project and my growth throughout, so I am very excited,” Siripurapu says.

Outside of the classroom and the lab, the sophomore spends her time advocating for women’s rights and reproductive health. In collaboration with two of her friends, she hosts a YouTube channel called “The Vagilantes” that features a series of videos ranging from educational talks on sexual organs and their functions to a rap about gynecology.

“I feel like you need to give people the power to understand the biological underpinnings behind their own body,” she says. “And that comes from science. It comes from fact.”

Vaishnavi Siripurapu is a sophomore double-majoring in biology and women’s and gender studies with a minor in medical anthropology within the UNC College of Arts & Sciences.